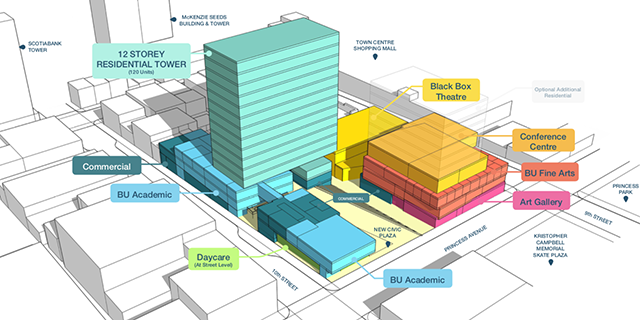 BU: Transforming downtown as a catalyst for growth and innovation.

NOTE: This project has concluded. As of early 2021, the project is expected to relaunch with an updated scope through the City of Brandon and the Brandon Downtown Development Corporation.

This development is envisioned to be a mixed-used complex, with substantial residential spaces for students (including traditional sequential students as well as mature students, students with families, and non-traditional students), as well as other types of housing. The development envisioned may also include commercial space, community-use space, public plaza space, academic space, and/or other types of space that may be deemed desirable or required for feasibility of the project.

The Brandon University Board of Governors has established an advisory group that will help it consider three detailed proposals for a possible BU development in downtown Brandon.

After receiving a pre-development report on the 70,000 square foot parcel last year, the Board of Governors began exploring options with private developers, and invited submissions this winter. Three proposals have now been received.

Proposals have been received from Sneath Group, from VBJ Developments, and from Wheat City Revitalization Partners.

The Downtown Development Advisory Group, which includes members of the BU Board of Governors as well as community members, will fully consider all three proposals. It is expected to make a recommendation to the Board in the coming months.

Seven properties downtown have been brought together into a parcel for possible development that is nearly 70,000 square feet, covering the entire vacant southern half of the block at Princess Avenue. The properties have been assembled thanks to agreements with the City of Brandon, Renaissance Brandon, Landmark Cinemas and private landowners. Yielding tremendous value to the city and to the University for years to come, the land transfers are at minimal dollar value to facilitate the initiative while not straining the University’s financial resources.

This is an exciting development that will be transformative for both the University and for the entire city.

Having this amount of space downtown will open up new opportunities to advance the University’s priorities as stated in our Academic Plan, the themes that are emerging from our Campus Master Plan, and meet student residence needs. It also bodes well for the future of downtown Brandon. It represents one of the most significant developments for the University and City over the past several decades.

We are committed to working collaboratively with all students, faculty and staff as we fully develop plans to make the best use of this downtown space.

A pre-development report commissioned by Brandon University outlines some options, opportunities, and potential costs of the project, to help inform future discussion about the potential for BU downtown. The report, which draws on external expertise engaged by BU as well as a series of community conversations that were held to explore possibilities for the downtown site, was presented to the BU Board of Governors on March 17, 2018.

The layout and context of the BU downtown site, as well as best practice examples in other areas, help guide possible approaches approach to this project. There are different options for developing the site, including alternate locations for buildings, interim uses between phases, and public plazas. The pre-development report does not contain fully realized options, but rather selected arrangements to test approaches. Further discussions, questions and community conversations are anticipated.