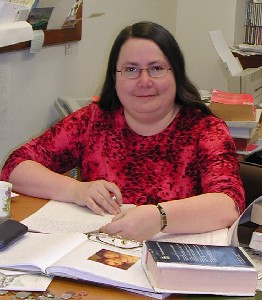 Research for me is a three-edged sword.

The first edge, I admit, is the one in which I take the keenest interest. I am a medievalist, specializing in the literature of fourteenth-century England. My most significant work has centered on the long narrative poem, Piers Plowman which was written between 1362 and 1388, more or less, in three, perhaps four, authorial versions, by William Langland, the name by which most scholars today, but not all, have come to identify the author.  Piers Plowman describes a society in crisis on all its levels, beset by many of the same social problems we still face today: abuse of power, political cronyism, and crushing poverty, to name just a few.

What fascinates me most about this poem is its complexity: in spite of all the ink split and the trees pulped over Piers Plowman for the past century, the poem is still a mystery to all who study it. I aim to fill in some of the blanks in our historical and cultural knowledge of the poem, its author, its readers, and its milieu. In a recent article, “The Practice of Medicine in Piers Plowman“, I examine the references to medicine in the poem for what they can reveal about Langland’s knowledge of the medical practices of his time. The pervasive medical language in the text is much more than the obvious metaphor for sin and salvation which it has too often been made out to be by modern literary scholars; and Langland clearly knew very well that medieval medical theory and practice was not rooted in the metaphysics and superstition which too many medical historians today assume it must have been. Langland demonstrates knowledge of the best practices of medicine in the fourteenth century. (Even so, I am ever so glad that I was born in the twentieth century, at a time when medicine can cure disease as well as offer preventative and palliative care!)

Currently, I am working on a book length study of one particular manuscript of Piers Plowman, Cotton Caligula A XI. I am particularly interested in how readers read texts. There are over 50 known manuscripts of the poem, each of which is a unique version of the text. Because they are written out by hand, word by word and line by line, texts in manuscript format are greatly susceptible to the whims, mistakes, and ulterior motives of copyists. My research is putting to the test the theory that early reader response to Piers Plowman, or any premodern text, can only be understood within its manuscript context, in all its complicated glory. The modern print editions, even as their editors strive to recreate the author’s very own words, cannot hope to reflect the medieval reader’s experience of the poem.

The second edge is Latin. At the moment I am collaborating on my third project with Dr. Andrew Pernal of the History Department, an edition/translation of W.W. Kojalowicz’s 1651 Latin text, “De rebus anno 1648 et 1649 contra Zaporovios Cosacos gestis.” Translation is a greatly underappreciated skill, demanding sensitivity to the inner workings of both languages. Indeed, Latin and English are very different languages in the way they express meaning, and to switch complex ideas from the one to the other is challenging. To begin, a sentence of the original Latin is thus:

A first rough draft renders quite exactly how the words and ideas in the Latin are relating to each other syntactically, so that the translator will not miss or mistake the nuances of the author’s original text. But a rough draft, indeed, sounds very rough:

“To those still there between plans of coming and going, it was announced that the rebel Tribunes Krzywoszapkum and Mikuliczium furnished with eight troops of warriors, although they had safely reached Popowagora, warned about the Lithuanian forces one league away, fearfully and hastily had turned their troops into flight.”

Yet this result, while it is no longer in Latin, most surely is not in English either. It is what one of my Latin professors called ‘translationese’ — a half way step between the two languages. The translator’s greatest challenge is to go beyond this half step and to render the original sense intact with grace and style into another language’s idiom. Something, perhaps, more along the lines of the following:

“The news was reported that, although they had reached Popowagora safely, the rebel hetmen, Krzywoszapka and Mikulicz, with their eight divisions, had hastily fled in fear after they had been warned that the Lithuanian forces were but one league away.”  (That said, I am also ever so glad that I was not born in seventeenth-century Lithuania. In this project I discovered that Romania’s Vlad the Impaler was not the only one to execute his enemies by driving them onto stakes. It was actually a quite common practice.)

The third edge of my research is my work as the Reviews Editor for the Canadian Journal of Native Studies, which I have done now for about twelve years. This role came to me by geographic circumstance: CJNS needed a reviews editor, and I was here. Yet it is not as far removed from the other two edges as one might think. Issues of language, heritage, survival and oppression seem, often unfortunately, to be universal human constants.

Studying fourteenth-century England and seventeenth-century Lithuania can help us to understand twenty-first-century Canada, and vice versa.

Truth, after all, is another three-edged sword.

For info about the English Degree:
roseb@brandonu.ca

For info about Creative Writing:
lakevold@brandonu.ca

For info about Drama:
forsythe@brandonu.ca