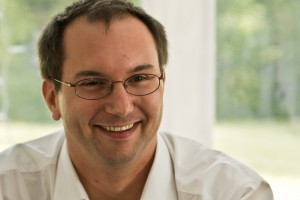 Originally hailing from Northern Ontario, Jon-Tomas Godin has had a varied career path leading up to his appointment as Lecturer in Music Theory at Brandon University. While completing a very general B.Mus. degree at the University of Ottawa, where he couldn’t decide whether he wanted to be a performing pianist, a conductor, a teacher or a scholar, Godin paid the bills by teaching piano lessons, playing parties in the Ottawa circuit, and working as a financial analyst for high tech companies working to fix the Y2K problem for federal government departments. Once he finished with all that, he decided to pursue a graduate degree in music theory. During his M.A. studies at McGill, Godin developed interests in common practice harmony and form, Schenkerian analysis, and analysis of Renaissance polyphony.

After a brief hiatus from music academics to work in maritime logistics, he returned to graduate music work, entering the Ph.D. program in musicology at Université de Montréal under the supervision of François de Médicis. His dissertation research tries to zero in on the intersections between philosophy, literature and music, ascertaining the cultural and aesthetic values behind sonata form as seen in 19th-century piano sonatas. During his tenure as a doctoral candidate, Godin has had the opportunity to accumulate a good deal of classroom experience at the Université de Montréal, the Université de Sherbrooke and the University of Ottawa, teaching courses in harmony, counterpoint, analysis, music appreciation, music history, aesthetics, and critical thinking. His research interests branch out beyond studies of form to include the musics of late 19th and early 20th century French composers César Franck and Claude Debussy, the intersections between philosophy and music, and Wagner.