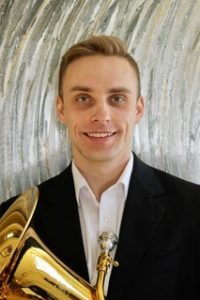 Kevin James holds a Bachelor of Music from Brandon University and was the Silver Medal recipient in his degree program. He later completed a year of graduate studies in music performance at the University of British Columbia in Vancouver where he was the teaching assistant for the Symphonic Wind Ensemble and multiple conducting courses. He is currently the full time euphonium player of the Royal Canadian Air Force Band in Winnipeg, Manitoba. In addition to performing wind band and solo repertoire, Kevin has worked with a variety of ensembles including Command Brass, Market Street Brass and the Son Latino Band. Kevin is also a committed clinician and community music advocate. He has conducted the Brandon Community Orchestra, volunteered with the Canadian Cadet Organization bands and served as a guest clinician for several public school music programs.

Kevin is dedicated to developing fundamental and realistic approaches to brass pedagogy. His excitement for collaboration with fellow musicians and educators fuels his desire to create effective and rewarding learning experiences for low brass players. Before his posting to Winnipeg in 2017, Kevin served the Canadian Army as an artilleryman in the primary reserves for ten years. After returning from a tour in Afghanistan, he proudly served multiple engagements with the Band of the Ceremonial Guard in Ottawa, ON; and the Royal Canadian Artillery Band in Edmonton, AB.