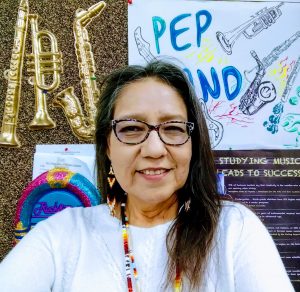 Kim Cournoyer Warren is an enrolled member of Standing Rock Sioux Tribe, where she lives and teaches at Standing Rock Community High School in Fort Yates. Her Lakota name is Winyan Owanyankan pi Win, which means “They All Looked at Her.” When she was young, her family lived in the Chicago suburbs where she learned to love music. Her family traveled back to North Dakota during the summers. Her mother dreamed of returning to the tribe and teaching, a dream that Kim fulfilled and has been doing for the last twenty years.

Kim studied clarinet under Dr. Paul Cherry and earned her bachelor’s degree in Music Education at the University of South Dakota. In addition to participating in many ensembles and bands, it was there that she was reunited to her Native Culture, which she strives to connect deeply with today.

Kim believes music education has played a significant role in the everyday success of students at Standing Rock High School. Her influence has encouraged many of her students to pursue music in higher education. Students love to play both pep and concert band and are well known as a local favorite tournament band. Kim has taken her students on many trips, both to other schools to encourage beginning band programs, and to encourage student’s love of music. As well as taking some of her students to IMC over the past five summers, SRHS band has traveled to Orlando, Minneapolis, Rapid City, and NYC National Museum of the American Indian.