Fossils are the remains or traces of ancient organisms preserved in rocks. Fossils can tell intriguing stories about Earth and life history: they are critical evidences for evolution; they provide unique clues to paleo-environment, paleo-climate, and paleo-ecology; they also play important roles in confining the age and correlation of rocks and the exploration for oil and gas. Due to burial and preservation biases, however, not all organisms can be preserved as fossils. The activities of individuals and the interactions among them are even harder to be retained. These reasons make the telling of stories from the fossils more challenging, yet, at the same time, more rewarding. This research is an attempt to uncover the biotic interactions, to identify prey and predators and to reconstruct the food chain/web of a Late Cretaceous (~80 million years ago) community in Manitoba.

Quite different from a living community, the biotic interactions of a fossil community cannot be observed directly. Drill-holes and other traces left by predators on their prey are among the few examples of biotic interactions that can be preserved in fossils. Drilling, along with other predation, played important roles in the evolution of community structures and provides a unique window into the temporal evolution of predator-prey interactions and the broader concept of evolutionary patterns. Nonetheless, determining fossil predators at the species level can be very difficult because different groups of predators can produce similar traces. The morphology of the traces is not just a function of the anatomy or behavior of predators but may also vary greatly depending on prey morphology and other factors. Only when the prey and predators are determined, can a food chain be reconstructed and, in turn, a food web be recognized. Such information will facilitate our understanding of the paleo-ecosystem and its evolution.

Over 900 fossil specimens were collected from the Upper Cretaceous rock near Russell, Manitoba. Through lab preparation and study under a microscope (including a scanning electron microscope), fossils are identified to species levels. Breakage patterns of shells, repaired/healed scars, and circular to ovately shaped holes on some shells are carefully examined and interpreted as caused by crushing/peeling and drilling predations. The culprits who were responsible for the predations are identified and a food chain/web of the local community can then be reconstructed. Based on the survey of fossil evidence beyond the study area, a food chain/web of a much larger community living in the Western Interior Seaway [WIS] (a narrow seaway connecting Gulf of Mexico to the Boreal sea during Late Cretaceous) is proposed.

The rock of the Late Cretaceous age is well exposed in the Russell area of Southwestern Manitoba. Over 900 macrofossil specimens are collected and assigned to 13 species: scaphopod (tusk shells) (1), gastropod (e.g., snails) (7), bivalve (e.g., clams) (2), cephalopod (e.g., squid) (2), and crab (1). Other components may include polychaetes (marine worms—based on the traces they left on some shells) and microorganism forams (single-celled organisms with shells). The broad presence of microscopic phytoplankton, zooplankton, and bacteria (as decomposers) can also be inferred. Well-preserved and commonly presented predatory drilling traces on scaphopods, gastropods, and bivalves are interpreted to be made by Euspira obliquata, the only naticid (a family group) gastropod in the community. Crushing/peeling predation traces and repaired scars on scaphopod and some gastropod shells are interpreted to be caused by crabs. On the basis of these biotic interactions within the benthic (living on/in the substrate) community and the feeding habit of living scaphopods, a reconstruction of the local food chain/web is attempted. A diverse vertebrate fauna of similar age has been reported in the WIS, including fish, mosasaurs, and plesiosaurs (extinct marine reptiles). Based on previous studies on the food remains in the body chambers of ammonites (extinct sea creatures), shell crushing predation on other cephalopods, tooth marks on ammonites, and gut contents of mosasaur and plesiosaur specimens, the food chain/web in the WIS is proposed as shown in the figure. 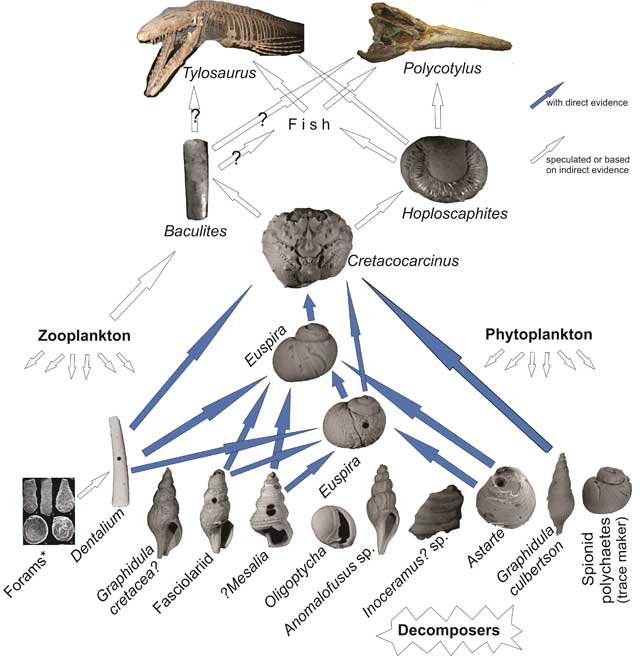 Dr. Rong-Yu Li is a professor in the Department of Geology at Brandon University. His research has received funding from NSERC, BURC, BUSU work study program, and the State Key Laboratory of Palaeobiology and Stratigraphy, Nanjing Institute of Geology and Paleontology, Chinese Academy of Sciences.