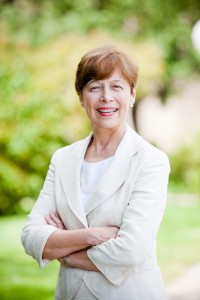 Dr. Ramona Lumpkin joined Mount Saint Vincent University as President and
Vice-Chancellor in October 2010.  Prior to join the Mount community, she was Principal of Huron University College from 2001 to 2010, an undergraduate liberal arts institution affiliated with The University of Western Ontario. While there, she managed the operations of the College and of the Huron University College Foundation and was responsible for providing academic and administrative leadership including setting strategic direction and fundraising for the College.

Prior to her service at Huron, Dr. Lumpkin spent four years as Vice President Academic and Provost of Royal Roads University, Victoria, where she gave leadership to four academic divisions in the development and delivery of degree programs in a newly established university.

Dr. Lumpkin went to Royal Roads from the University of Windsor where she was Dean of Continuing Education, Director of the Division for Instructional Development and an Associate Professor in the School of Dramatic Arts between 1992 and 1997.

Prior to Windsor, Dr. Lumpkin was Associate Dean of the College of Lifelong Learning at Wayne State University in Detroit, Michigan.

Dr. Lumpkin began her university career in Kentucky where for 13 years she held a variety of positions in higher education that included institutional planning, continuing education, faculty development and university teaching.

She holds the PhD in English Literature from the University of Kentucky and is a former Fulbright Scholar to England. Her research and teaching interests include 19th Century British literature, 20th Century drama, women’s literature, and adult and continuing education.

Throughout her career, Dr. Lumpkin has been actively engaged in women’s studies, in advocacy on behalf of women’s issues and in promoting the role of women in higher education. At the University of Kentucky she served on the founding committee of the annual Women Writers Conference. At Wayne State University, she belonged to the President’s Commission on the Status of Women.

Dr. Lumpkin has a strong personal commitment to community service and has been a volunteer with various not-for-profit organizations such as Big Sisters, the Kentucky Women’s Resource Center, Windsor Women Working With Immigrant Women, and Leadership Victoria.