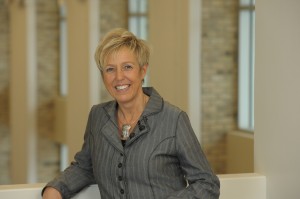 Passionate about the values of a learner-centered college, her career spans 25 years in the post-secondary system where her leadership approach has inspired transformative change and innovation. Prior to coming to Red River College, Stephanie was the President of Northwest Community College for 10 years.

Forsyth is driven by the belief that colleges have a responsibility to meet the economic and social inclusion imperatives of Canada.  Under her direction, RRC has launched an ambitious Strategic Plan which seeks to greatly increase Aboriginal participation and success; strengthen student achievement; and; enhance student access to applied learning and research opportunities.

Ms. Forsyth’s work is animated by her commitment to giving back to her community and her profession. She serves on various Boards and Councils, including the Premier’s Economic Advisory Council, the Winnipeg Chamber of Commerce, the Manitoba Innovation Council, Winnipeg Partnership Committee and Innovate Manitoba. She is also a Director of the Board for the Association of Canadian Community Colleges (ACCC) and, a lead faculty member for the ACCC National Executive Leadership Institute for College Presidents.

Ms. Forsyth’s work has been often noted. She is the recipient of the Governor General’s Literacy Award, the Queen Elizabeth Jubilee Anniversary Award for her work in community development, the Queen’s Diamond Jubilee Medal for her work in education, the Northern Women’s Leadership Award and the Northwest BC Executive of the Year Award.