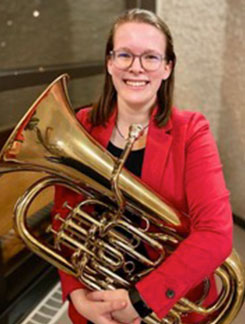 I come from small town Nova Scotia; a community called Dayspring a half hour drive from Lunenburg. Formed a love with music early on from my family’s communal love of music, taking after my grandfather’s steps and his deep passion for creating music with others. I have always been very involved with the music community and have met many great people through music and memories that will last a lifetime.

Speer heading a euphonium quartet in my second year of my program, we traveled down to North Dakota to work with Bryan Bowman when he was at our sister school doing a residency.

My grandfather played the tuba and passed away the year before the band program started at my school, I wanted to make him proud and chose an instrument that wasn’t as large as I was.

Be the change you wish to see in the world.

In the future I see myself sharing my knowledge and passion for music with the younger generations to come.

In one sentence, how will you #BreakTheBias?

I will #BreakTheBias by continuing on my path, showing that low brass isn’t just for guys and by being the role model I wish I had when I started out.

Emily has been a member of the Brandon University Low Brass Studio since 2018. She is an exceptionally keen student who has a passion for music, especially British Brass Band Music.

I have never had a student who has been more of a nerd about her instrument and its music than Emily Riding. She is enamored with brass band music and has a deep knowledge of the players, bands, and composers operating in that realm. Although the relative isolation of Brandon, Manitoba often makes engaging with the larger musical world more challenging, Emily has repeatedly shown a resourcefulness for finding performance and learning opportunities when away from school. She always has summer music making plans, which have included taking lessons from professional euphonium players, participating in the National Youth Band of Canada, or attending the North American Brass Band Summer School. Between these larger events, she works with her community band back home and frequently performs for church services. She also has started creating piano reductions for pieces originally composed for euphonium and brass band. We are working on starting the publication process for these pieces before she graduates.

Emily has had an interesting development in regard to her euphonium performance. By her own admission, she arrived at Brandon at a remedial level due to an uneven quality of music instruction during her middle school and high school years. She always had a passion for brass music, thanks to her grandfather, but was never put in a situation to excel. Emily made tremendous strides during the first two years of her studies and developed a beautiful sound, a more relaxed approach to technique, and an increased attention to phrasing. Like many musicians during the pandemic, however, performance and studying limitations inhibited her growth in the third year. The challenges created from studying remotely instilled a sense of resilience in Emily that has really helped her thrive in this last year of her study. Since returning, Emily’s progression on the instrument has been the fastest of her entire degree of study. She was rewarded for all of her hard work in December when she was accepted to a master’s program at the University of Birmingham in the United Kingdom. She will get a chance to study from and perform with some of the greatest musicians playing in the Brass Band genre. It is a huge honor and a dream come true for her.

The 2022 International Women’s Day #BreakTheBias theme is fitting as Emily’s career aspirations are leading her into a field that has long been ensconced in heteronormativity. The climate of the low brass performance world is not lost on her; subverting traditional female gender roles in classical music is an area of research and a personal passion for Emily. She is keenly aware of the impact of previous generations of female euphonium and tuba players. Over her four years of study here at Brandon, she has developed the confidence and skills necessary to join those voices in campaigning for greater diversity, equity, and inclusion in music performance.