Brandon University has been a leader in Indigenous education for decades. In 1975, BU was the first university in western Canada (and only the second in Canada) to establish a Native Studies Department. Our engagement with Indigenous programming continues today. 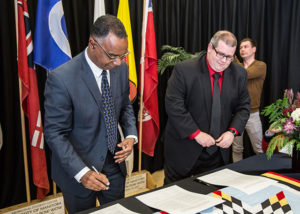 On Dec. 18, 2015, we reaffirmed our commitment by signing the Manitoba Indigenous Education Blueprint. The blueprint commits us and our fellow signatories to 10 objectives that will enhance Indigenous education. These new commitments will inform our future efforts, and join the initiatives we have already begun.

Brandon University was a founding partner in the Brandon Urban Aboriginal Peoples’ Council in 2010, and has maintained a close and fruitful working relationship ever since. In 2016, we proudly participated in the signing of a memorandum of understanding between the BUAPC and the City of Brandon, to promote Aboriginal education, employment and business inclusion in Brandon.