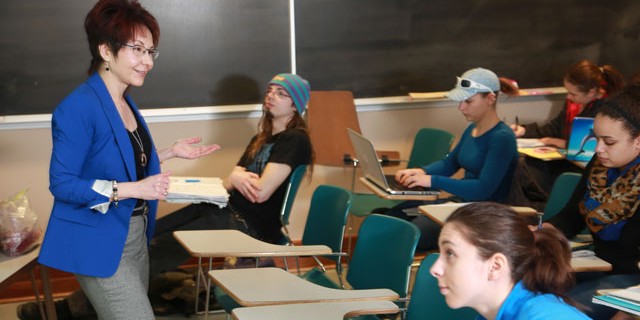 The study of religion is your opportunity to step back from one particular religion and observe all religions in context. The emphasis of your study is determined by your passions for this vast and fascinating aspect of our lives.

Students who enroll in Religion courses at Brandon University may expect an interactive and exciting classroom experience, in which participation and discussion are strongly encouraged. Assignments develop skills in research, critical analysis, creative problem-solving, and presentation to an audience.

Students are offered a wide range of courses that will introduce them to the academic study of religion in all its manifestations, from its prehistoric beginnings to its contemporary expressions. They will be given the opportunity to study the sacred scriptures of both Eastern and Western religions, as well as the religious beliefs and practices of traditional tribal groups. They will also be encouraged to examine the influence of religion on culture, selfhood, human rights, the environment, sexuality, and many other aspects of society.

In addition, there are specific courses on the role of women in various religions and on ethical decision-making, both within the different religions and within a medical context. Students may also sign up for year-long courses that will introduce them to some of the original languages in which ancient religious texts were written. Biblical Hebrew, Hellenistic Greek and Classical Chinese are all taught on a cyclical basis.

The Department offers, within the B.A. degree programs at Brandon University, both four-year and three-year Majors and Minors in Religion.

The great strength of the Department is the breadth of courses that it is able to offer through its individual members, each of whom specializes in a sub-field of the academic study of religion.

Upper-level students are given the opportunity of working with an instructor on a particular topic. The subjects are extremely varied and range from statistical analyses of changing trends within Canadian churches to the re-interpretation of archaeological data from the Ancient Near East.

Studying Religion is Relevant and Leads to a Satisfying Career

Religion students have obtained a variety of jobs after graduation. Some have become high- school or university teachers, both in Canada and abroad. Many have gone on to complete Law or Social Work degrees. Others have trained to be clergy. Still others work in museums, while some are full-time commercial artists. Then there are the majority who use the critical skills they acquired to work in government or commercial enterprises.

Questions about Religion at Brandon University: Email enquiries about our program should be directed to Dr. Alison Marshall, the Department’s Website Co-ordinator: marshalla@brandonu.ca.