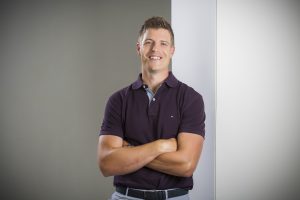 Jonathan Filewich is building a bridge from one career to another at Brandon University.

Filewich was well-travelled before his arrival at BU. He grew up in Sherwood Park, Alta., then was off to Prince George, B.C., and later Lethbridge, Alta., to play in the Western Hockey League. After graduating from high school and completing his time in the WHL, Filewich began a six-year professional hockey career that took him to the United States for stints in the National Hockey League and the American Hockey League, before he finished with two more seasons in Austria and Croatia.

“I knew my hockey career would not last forever, so during that time, I was also taking distance courses through Athabasca University,” Filewich says. “When I retired from professional hockey due to concussions, I enrolled at Brandon University because my wife and I decided to make Souris, Manitoba our home. My wife had a very positive experience attending BU, specifically in the Faculty Education, and the size, location, and cost of BU were all contributing factors in my decision.”

Education is highly valued in Filewich’s family. His grandfather worked in the Faculty of Education at the University of Alberta, while his step-father also works at the U of A in Finance and Registration. It’s no surprise then that education figures prominently in Filewich’s plans. He is working on his Master of Education degree specializing in Educational Administration and is considering pursuing a second master’s degree in Curriculum and Pedagogy.

“I love to learn and I am always looking for opportunities to grow,” he says. “I feel my past experiences as a professional hockey player, the education I have received from Brandon University, and my daily teaching practices have prepared me to take on just about any position within the education world.”

The same approach that Filewich took to hockey has allowed him to flourish in the university environment. Through hard work, time management and teamwork he has been recognized through various awards, bursarsies, medals, honour lists, societies and scholarships.

“I would encourage all students to make sure they take the time to build relationships with their professors and classmates,” he says. “These personal connections are so valuable both academically and professionally. I would also recommend that students make the time to fully engage in their university experience and courses and ensure they are always putting in their best effort. Relationships and work ethic will always take you far.”