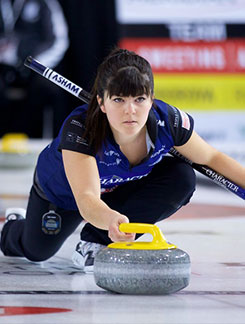 Two of my recent accomplishments that I am proud of include being placed on the Dean’s Honour list and inducted into the President’s Honour Society for my GPA at Brandon University.

I am also proud to be playing second position on a competitive women’s team (Team Meilleur) out of Winnipeg for the 2016/17 season, competing in Manitoba curling tour and world curling tour events across western Canada. We had a very successful season by qualifying in 5 out of 7 events and as a result sitting at the 14th women’s team in Canada and 32nd in the world for team ranking. We also were fortunate enough to earn the right to compete at Scott Tournament of Hearts Provincials in January and we also made our first appearance at the Canadian Open Grand Slam of Curling event in early January in North Battleford.

I am proud to be skipping the Brandon University Bobcats women curling team. Last season we competed in CIS Western playoffs in Edmonton and won our spot to CIS Nationals in Kelowna B.C. where we finished 5th overall, just shy of a quarterfinal spot. We have been practicing hard and will be heading out early March to compete in Western’s again this year. I am so proud of how hard my team has worked this year not only on the ice, but off the ice with training and fundraising so that we can afford to get to Edmonton, and I am so lucky to have the opportunity to curl with three great girls for BU!

In terms of volunteering I am very fortunate to be able to help teach a free adult curling program every Monday night. I help my friend teach the basics of curling to adults who would like to have the opportunity to play in a league and enjoy the sport. It is a great way to promote the game! Last year I also volunteered teaching the junior curling program one night a week. This year I am also the President of the Brandon University Geography Club. In the previous year, we had a great president who began a green campus initiative that we have been working hard at continuing this year by working with Brandon University to improve the recycling/waste management throughout the school. I am very excited about the opportunity to make BU a greener school!

I grew up on a cattle/grain farm south of Oak Lake, Manitoba. I spent my summers working in the field, where I learned not only the value of hard work, but to appreciate the small things in life. In the winters I spent most of my time curling; a sport I fell in love with immediately. I was fortunate enough to have my father coaching me as I made my way through high school and junior competitive curling. The hours and hours I spent on the ice working with my dad got me to where I am today.

Since graduating from high school I have lived in Brandon, while working on my Science degree. Since moving to Brandon I have also worked at the Agricultural Research Centre, full time in the summers and part-time during school.

I began my degree in Geology, and was enjoying it very much but switched to Environmental Science a couple years into the program because I liked the job options better. With this degree I hope to get a job where I can work to actively protect the environment and support sustainability. I enjoy being outside and hope that I can get a job where I am fortunate enough to spend most of my time outside and active.

There are two quotes that really resonate with me:

If there’s anything I’ve learnt to this point it is that you have to keep pushing forward and working hard for what you want, and it may take a long time and a lot of grit and determination, but you will get there. Life is going to throw huge piles of dirt at you, and sometimes it would be so easy to quit, but you have to keep going and things will get better. Always trust your instinct and remember to look out for yourself, and remember that only you dictate what you do and want in life. I also try to remember to always be grateful.

I am hoping to get a summer job in my field of study upon graduating and in the fall I look forward to living in Winnipeg, working part-time and focusing mainly on my curling career. If I’m still fortunate enough to be doing this in the next 10, 15 or 20 years I will be doing what I love and that’s what I see for my future.

Janelle Vachon is an Environmental Science student who does well in her courses. Her writing is indicative of someone who studies hard and is a good communicator – ie. she writes well. Outside of class, I know she is involved in the student club, BUGS (which includes geography and environmental science students), as president this year, and outside of BU, she is a competitive curler who most recently played for team Meilleur in the Meridian Canadian Open (part of the Grand Slam of Curling) in North Battleford in January – a nationally televised curling event.