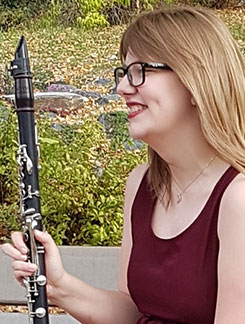 What accomplishments (awards, scholarships, volunteer work, organizations, memberships, etc) are you proud of?

I’ve had so many opportunities while I’ve been here at BU –I’m proud of the recital that I performed this year, and also being a part of the National Youth Band in 2016. I have also received the Lela Hoover Ward Scholarship for Woodwind Performance for all three years I’ve been at BU, and I’ve received one of the Shirley Craig Scholarships in Music for two years now. I have been Corresponding Officer on the Brandon University Student Music Educators Association (BUSMEA) for two years now, and I have been part of the Brandon University Music Students (BUMS) for two years as well, as Secretary last year and President this year. Academically, I have been on the Dean’s List every semester I’ve been at BU.

I was born and raised in Winnipeg, Manitoba by my parents, and I have one younger brother. Growing up I was a creative child, and I especially loved writing and reading. I was quite successful at school, and I had the opportunity of going to a large high school with lots of options for activities. In high school I was busy – along with being in pretty much every band that was offered to me I was also really involved in my high school’s improv team and had the opportunity to travel to Second City in Toronto with them in my Grade 12 year. Going to BU was not the obvious choice for me – my parent’s live very close to the University of Manitoba, and most of my friends from high school chose to go to the U of M. But I knew that Brandon was a better fit for me, and I moved here three years ago to start my Music Education degree.

Unlike a lot of music students I do not come from a musical family – neither of my parents play an instrument or are especially interested in music. I started playing clarinet in Grade 7 when band was first offered – but my real musical interest was playing bass in jazz band. I would say, until Grade 11, I was much more interested in jazz and bass playing – I really only played clarinet because you had to be in band to be in jazz band. As entering university came closer, I knew that being a clarinet major would make my Music Education degree easier – so I started taking private lessons with Chris Byman, and he really helped me discover a love for playing the clarinet! As for the education side of things – being a teacher has always come naturally to me, and I love sharing knowledge and helping people acquire new skills.

I’m a big believer in the saying “fake it until you make it”. I’ve received lots of opportunities that seem too large to handle or terrifying to do, but taking those chances anyway and acting with confidence has always lead to me being actually confident by the end. Ultimately, if people are giving you opportunities, it means they believe you can do it – so if you don’t believe in yourself know that someone does.

Immediately after graduating I look forward to moving into a high school classroom to teach band. I’m also very interested in teaching abroad, teaching either music or English. Eventually, I would like to pursue a Master’s and Doctorate in Music Education, and do some research and publishing in the field.

I would like to nominate Katherine Charles as an exceptional female student at BU to be honoured and recognized by BU in celebration of Women’s Day.

Katherine is in her fourth year of the Music Education program. I have known her for four years through applied clarinet lessons, studio class, clarinet choir, instrumental methods courses, and various School of Music events.

Kathrine is a leader amongst her peers and is very active in student organizations. She is the president of the BU Music Students Organization and is on the BUSMEA (BU Student Music Educators Association). Through BUMS and BUSMEA she helps contribute to the creation of professional development opportunities for both music students and young professionals. In addition to the music education conference Da Capo, she helps organize many fundraising and social events for the music students. She also serves as the BU Clinician Liaison which connects schools in the community (MB) with BU students and faculty. In 2016, Katherine won a chair in the National Youth Band of Canada  (competing against clarinetists across Canada) and had the opportunity to perform and tour with the ensemble. As a Music Education students she is not required to give a recital but she has chosen to enrich her education and take advantage of the opportunity to give a recital at BU. She will perform a full recital at the end of February—this involves a great deal of extra work and is challenging for students in the Music Education program as it is such a demanding degree. Katherine volunteers her time to help provide music and educational opportunities to others. She also volunteered for the Brandon Jazz Festival, the Winnipeg Jazz Orchestra workshop, and as a music mentor for her former school.

I strongly recommend Katherine for this honour. She is a strong woman and role-model who works to provide others with opportunities that enrich their education and lives.