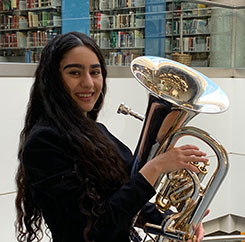 I was born and raised in Winnipeg, where I spent much of my childhood clinging to my twin sister. She was my biggest competitor and my number one fan. Throughout high school, I found my passion for performing through honour bands, fiddle contests, and performing in our school’s musical. My favourite thing to do was to play the euphonium, which is still my favourite now! When I am not practicing, I spend a lot of time listening to music, spending time with my pets, or watching an absurd amount of Netflix.

I graduated from Elmwood High School in Winnipeg, Manitoba in 2017. I began my current degree in euphonium that fall and will be graduating in May 2021 with a Bachelor of Music in Brass Performance.

I am very proud of the scholarships that I have been given. I graduated high school with the Governor General’s medal and a few scholarships that helped me move away from home. I have also received awards at BU. Most notably, the Chernoff Family Award, which I have received each year of my degree and the Louis Riel Institute Bursary, which I received in 2017, 2018, and 2020. I have also been on the Dean’s List and the President’s Honour Society from each year so far.

This year I was able to be involved with the Brandon University Students’ Union initially as Music Director, and now as Vice President External. Through this role, I have had the pleasure of working on several projects that have directly benefited students during a wildly unpredictable school year. I am proud to have been able to serve students in this challenging time and look forward to using this experience in my graduate studies.

I was always a very musical child and I owe that to my mom and grandparents for funding and supporting countless recitals and competitions. I was able to study piano, violin/fiddle, euphonium, and trombone thanks to their love and generosity. I then had an amazing band director in high school. Mr. Mark Sawatzky pushed me to do many extra-curricular activities that opened my eyes to careers in classical music. Once I knew it was possible, I couldn’t see myself doing anything else.

I believe in chasing your dreams relentlessly. Music school has taught me to recognize my limits. I’ve spent a long time pushing too far or not far enough, but I think I’m finally learning how to listen to what my body needs and to prioritize that over expectations of “success.” It’s important to bring your whole self to the finish line, whatever it may be and that means not sacrificing health or wellness in the pursuit of a goal.

In the future, I hope to be teaching low brass and playing as much euphonium as possible. I would love to teach at a university, but I also know that there are many other possibilities that I have yet to discover.

What do you #ChooseToChallenge?

I #ChooseToChallenge jokes made at the expense of women.

Sophia Rivera is a fourth-year performance major in euphonium in the School of Music. She is an exceptional person, which is easy to discern simply from spending time with her. She has a superior work ethic, which has been unfailingly consistent throughout her entire undergraduate career, resulting in stellar academic and musical performance achievements and receiving multiple scholarships, bursaries, and awards. Sophia is an engaged student leader who is generous and willing to share her insights and success to improve the experiences of her fellow music students and those around her. During the pandemic, she has volunteered her time on multiple occasions to share her knowledge with incoming music students and she initiated a program to provide BU students with access to laptops to insure equitable access to online classes. She is the Vice President External for BUSU and serves on two senate sub-committees and is also the undergraduate student representative on Music Faculty Council. Sophia is an advocate for social justice, supporting the rights of Indigenous peoples, women, children, and racialized groups, to name just a few, but she is truly a champion for the equitable treatment of all people.

I have known Sophia since 2016 and have taught her private lessons for the past three and a half years. I can say, without hesitation, that she is the best euphonium player I have ever taught. Sophia’s technique on the instrument rivals the best undergraduate music students in North America. She has a tremendous work ethic and an overabundance of musical talent. During her time at BU, Sophia has participated in the National Youth Band of Canada and the CBDNA Intercollegiate Band, as well as travelled to the east coast of the United States to perform in a tour of brass chamber concerts.

Sophia’s strengths go well beyond the instrument. Currently, she serves as the Brandon University Student Union’s VP External, a role that requires her to attend numerous extra meetings throughout the year, including the University’s bi-monthly Senate meetings. Throughout this semester, she has been an extremely visible champion for our students. Word of her excellent preparation, communication, and advocacy skills arrives frequently in my inbox or during meetings. If she were not such a great euphonium player, she would have a bright future in politics!