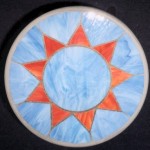 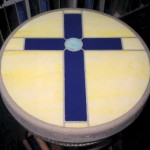 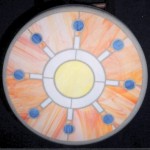 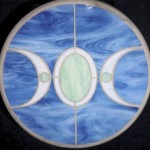 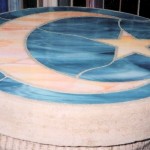 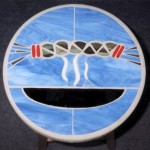 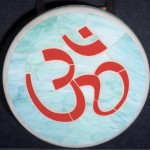 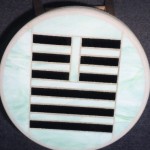 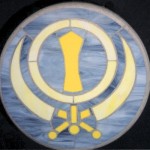 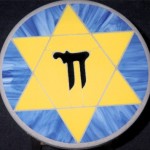 Nine Pointed Star: The symbol of the Nine Pointed Star reflects the Baha’i faith’s high regard for world harmony, peace, and equality. Baha’is strive to “make humanity into one global family and the earth into one homeland” (Brandon Baha’i).

Cross: The Cross is a representation of Jesus whom Christians accept as Christ (the Messiah) and the Son of God. They believe that Jesus died on the cross to deliver all people from their sins, and emphasize love, peace, service, and forgiveness. They recognize the Trinity of God the Father, God the Son, and God the Holy Spirit.

Dharma Wheel: Buddhism’s Dharma Wheel and its eight points symbolize the various types of living (Eightfold Path) that lead to a peaceful existence in the world. The Buddha, reputed to have lived in India during the 6th century BCE, is an example of individual peace and the end to suffering through enlightenment.

Crescent and Star: The faith of Islam is symbolized by the Crescent and Star. The Crescent is the early phase of the moon and represents progress. The star signifies illumination with the light of knowledge. Islam by definition means submission and has the extended meaning of peace.

Sweet Grass in a Smudge Bowl: Smudging is a ritual of purification performed before any ceremony or sacred rite. According to Native religious beliefs, human beings should strive to live each day in balance and harmony with themselves and other parts of creation.

Aum: The symbol Aum is the closest verbal expression of Brahman, the universal essence of the soul. This symbol is often chanted during puja (worship), and is visually represented on many objects.

Tai symbol of Peace: Daoism, a religion of China, is represented by the symbol of the hexagram Tai from the Classic of Changes (I-Ching/Yijing). It means peace and indicates harmony between earth (the three broken lines) and heaven (the three unbroken lines).

Khanda: The Sikh symbol, the Khanda, is composed of the double-edged sword in the centre, surrounded by the circle (chakra), with the kirpan on both sides. It represents union with God, and the importance of divine knowledge, action, and devotion while living peacefully.

Chai symbol within the Star of David: The Jewish belief in peace and harmony is reflected in the integration of Chai (life and good luck) with the Star of David, a traditional symbol of the Jewish peoples. “Judaism may be characterized as a religion of deed, a ‘Way’ of action by which people attempt to respond to God’s teachings and principles.” (Bruce Sarbit).