On August 10, 2002, Brandon’s newest tourist attraction and spiritual haven will open its doors, or rather its stones, to the city.

This date marks the grand opening of the Labyrinth of Peace, a research, educational and construction project under the direction of Dr. Alison Marshall, assistant professor at Brandon University’s religion department.

The labyrinth, which began as a $2000 community outreach project with Brandon’s Riverbank Inc. in April 2001, blossomed into a major collaborative effort that has involved four students, local businesses, residents and religious groups.

Today, over $20,000 has been raised in monetary and in-kind support from 16 contributors around the city to construct the labyrinth’s wheel-like walking path that will be located in Assiniboine Riverbank Area, across from Kirkcaldy School and to the West of Red River Trail.

From the project’s onset, Riverbank Inc. supported the labyrinth’s location and construction in the Riverbank Area. According to Dr. John Everitt, president of Riverbank Inc., agreeing to partner the project was easy.

Dr. Marshall said that after Riverbank Inc.’s support, media coverage and a lot of hard work, the project gained momentum.

“As more people learned about the project and as we got a plan with specific details of what the labyrinth would look like, the size, and the materials we needed, more people became interested,” she said. 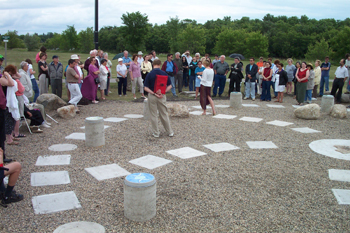 Angela Conrad speaking at the Grand Opening of the Labyrinth

The labyrinth occupies a plot of land 50 feet by 50 feet donated by the City of Brandon through Riverbank Inc. It will feature 10 colourful stained glass religious icons (see below), embedded in cement and mounted on small pillars. Stepping stones, molded out of concrete and surrounded by crushed stone, will form the outer circle of the labyrinth, and form the five paths that meet at its center.

The original labyrinths, which were Christian in origin and built in the 1200s, had a spiritually significant centre. The journey to the centre and out again acted as a sacred pilgrimage so that Christians could become closer to God.

Since Dr. Marshall’s labyrinth represents 10 different religions, it became more difficult to select a symbol for the centre. She chose a wheat sheaf because of its importance to prairie life.

“The wheat sheaf represents the social, economic and cultural importance of wheat in the lives of people in this region.”

Explanations for the sheaf and the 10 other symbols will be featured on a sign at the entrance to the labyrinth. Dr. Marshall also plans on publishing small books, to be sold at the Riverbank Discovery Centre, that explain the symbols and the history of the 10 religious groups in Brandon.

Dr. Marshall said the labyrinth basically began as a whim that simply mushroomed. A native of Toronto, world traveler and specialist in Chinese religions, she has been exposed to multiculturalism and knows the importance of religious tolerance. After teaching several courses at BU, she realized the city’s own multicultural nature.

“You wouldn’t think that in Brandon, there are so many religions, but there are. Even though there aren’t churches, people still find ways to practice their religion,” she said.

The Labyrinth of Peace Project, which will highlight Baha’i, Buddhism, Christianity, Daoism, Earth Religions, Hinduism, Islam, Judaism, Native Religions, and Sikhism, came into being as an expression of Brandon’s multiculturalism and a reaction to a labyrinth in New Harmony, Indiana. 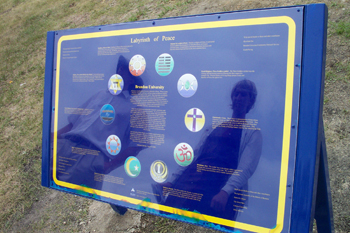 Angela Conrad and Joseph Trivers, researchers for the project, look at the sign at the Grand Opening, August 10, 2002.

Dr. Marshall visited the small Indiana town with her husband several years ago and became particularly interested in the efforts of a woman known as Mrs. Owen, an oil heiress who married one of Robert Owen’s descendents. Robert Owen led the initiative to establish New Harmony as a model cooperative community following the departure of the initial harmonist group in 1825. In 1957, Mrs. Owen initiated a revitalization of the movement and the community through religious structures. Her first building was a roofless church.

“It has four walls, and contains icons from all religions,” Dr. Marshall explained. “The idea is only the sky is big enough to hold all faiths.”

“This circular Christian pattern can be adapted to show how all of us are connected on the planet.” Dr. Marshall’s labyrinth illustrates this idea.

She said that the labyrinth will raise awareness about the diversity of faiths in the region. When asked about the response of groups featured by the labyrinth, Dr. Marshall replied that they have been very helpful in the endeavour.

“For the lesser known groups, they’re quite happy to see something of this nature representing them,” she said.

For Dr. Everitt, the labyrinth will add to the appeal of the Riverbank Area. Each season, thousands of tourists visit the area and while Dr. Everitt was unsure whether the labyrinth would draw in large numbers of new tourists to the area, he did say it would act as an additional attraction to what is already there.

“I think it will fill in a piece of the puzzle. It will be interesting for people walking through,” he said and added, “It will be one more thing to draw people to the riverbank and the more people down there, the better it is for us.”

Dr. Marshall says she has been lucky to have the community’s support, particularly that of Dr. Everitt. She says that without his help, the labyrinth could not have been possible.

And now it is. Just over a year after Dr. Marshall’s whim of creating something symbolic and interesting in Brandon, the Labyrinth of Peace has become a reality. On August 10th, tourists and residents will be able to walk the labyrinth’s spiritual path.

Opening ceremonies for the labyrinth, including opening speeches, food and refreshments, will take place from 2-5 p.m. at the Riverbank Discovery Centre on August 10.