The Chancellor serves as the formal head of Brandon University, and they are chosen for their ability to provide high-level vision, guidance and wisdom. Appointed by the University Senate, they act in an advisory and supportive role to the President. The current Chancellor is Mary Jane McCallum, who assumed the office in May 2021.

The Chancellor is a member of both the university’s governing bodies, the Board of Governors and the Senate, and they provide leadership and advice in fundraising campaigns and in relations with donors.

The Chancellor presides over each Convocation, where they bring greetings and advice to the graduating students as well as officially conferring the degrees.

The Chancellor also serves as a general ambassador for the university, supporting and promoting BU’s mission and values. Occasionally, they represent the University in an official capacity at external functions, and they host, attend or preside at other special events. 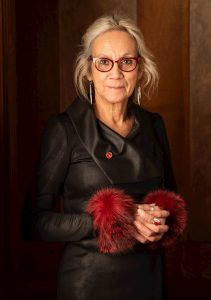 Chancellor McCallum is of Cree heritage and is a citizen of the Barren Lands First Nation in Brochet, Manitoba. She attended the Guy Hill Residential School in The Pas for 11 years. She is an advocate for social justice who, over the course of her distinguished career, has provided dental care to First Nations communities across Manitoba.

From 1979 to 1997, she was involved in the dental field in various capacities, including as a dental therapist in northern Saskatchewan and Manitoba communities and as an assistant professor at the University of Manitoba running a dental clinic in Churchill and overseeing students completing their practicum. From 1996 to 2000, she worked on an interchange with the Assembly of Manitoba Chiefs as the Regional Dental Officer for the province.

Dr. McCallum worked as an independent contractor for the federal First Nations and Inuit Health Branch providing services in northern Manitoba before returning to the University of Manitoba in April 2002 to lead the Aboriginal Dental Health Programs.

From 2004 until 2020, she continued to work to provide vital dental and health services before officially retiring from dentistry in April 2021. She remains a non-practicing member of the Manitoba Dental Association.

In addition to her professional endeavours, Chancellor McCallum leads workshops and presentations in which she shares her personal experience as a residential school survivor in an effort to raise awareness and understanding.

Chancellor McCallum and her husband have two daughters, and she also has a son.

She became a Senator in the Canadian Senate on Dec. 2, 2017, and she currently sits as a non-affiliated Senator.