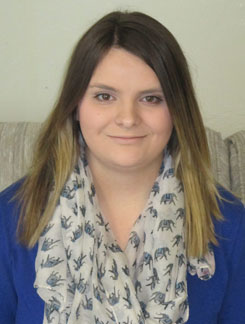 I am proud of how far I have come in my academic career. I did not care about doing well on assignments or exams during my first year at BU. I was so used to doing well at schoolwork in high school and never had to work hard to get good grades. It wasn’t until I began studying political science in my second year that I became invested in my studies and I was no longer content with receiving average marks.

I was on the 2013 Dean’s Honours List. I have been fortunate enough to receive several scholarships and bursaries from Brandon University, including the G.F. Macdowell Scholarship in Political Science, the Gary and Fanny Cristall Memorial Scholarship, and the Dr. Lee Clark Scholarship in Canadian History.

I was born in Brandon and raised just outside of the city. I went to school at Forrest Elementary and Elton Collegiate, graduating high school in 2011. I was on the honour roll for all four years of high school.

I was raised in a family that valued hard work and education. My family also encouraged my brother and me to discuss politics, history, and current events. My dad’s family are ethnic Mennonites and they have been involved with the Mennonite Central Committee and local Mennonite organizations. I volunteered with the MCC on several occasions during high school. My mom was the first person in her family to attend, yet alone graduate from university. She went on to earn three different degrees and has always encouraged me to do well in my academic studies.

When I look back, I have always been interested in politics and government, particularly with elections and issues related to human rights, but I never thought that it would be something that I would like to study or find a career in after university. I am very happy that I ended up studying political science. Not only do I find the material covered in courses incredibly interesting for the most part, but I tend to be one of the only female political science students, which gives me an interesting perspective on issues related to gender and politics.

I don’t really have any one philosophy in life. I have learned of the importance of hard work and helping others whenever possible.

When I have completed my education, I hope to perform research and perhaps work with an international organization on issues related to displaced persons and gender in the future. I have recently applied to a several Master of Arts programs in political science for the fall of 2015, and have been accepted in Carleton, but will make my final decision in the coming weeks.

I’ve had Katie in three of my classes over the past year.  In each, she has made valuable contributions and clearly distinguished herself as a thoughtful, creative, outstanding student.  Her written work has been excellent, and I especially appreciated how she was willing to take risks with the topics she chose to write about and her approach to them.  Katie is a very good writer, and she could have easily taken the safe route on her written assignments.  Instead she chose to challenge herself.  I also appreciated the contributions she made to class discussion.  Not only were her comments insightful – clearly demonstrating that she had not only done the readings but also that she was making connections with material from other courses – but she also participated in such a way as to encourage classroom dialogue, getting others to join in.  Katie is also very witty – her often dry sense of humor on a number of occasions lightened the mood or helped to illuminate complexities or contradictions in the content we were discussing.  It’s my pleasure to nominate her for this honour.