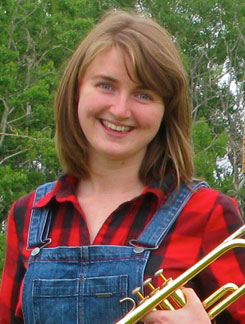 I graduated from the North Battleford Comprehensive High School in 2011 with my International Baccalaureate Diploma, and am now in the final year of my Bachelor of Music in Trumpet Performance studying with Dr. Edward Bach.

I am proud to have served in the Band of the Ceremonial Guard in Ottawa for the summer of 2014. It was an incredible experience to perform on Parliament Hill and becoming a member of the Canadian Forces taught me so much about myself. As well, it gave me an immense appreciation for the men and women who serve in the Canadian Forces.

I am also proud of my accomplishments as a student at Brandon University. I have been placed on the Honours List and in the President’s Honour Society every year of my degree, and have been fortunate to receive scholarships from the university to assist with the cost my education.

I am the oldest of two girls from North Battleford, Saskatchewan. My dad works for a library region, and my mother is a lawyer’s secretary. My family always encouraged me in music and my extracurricular pursuits. In high school I was active on student council, in the drama club, the book club, the community service club and of course, band, jazz band and choir. In 2010, I was named Jr Citizen of the Year in North Battleford and I graduated as valedictorian of my class in 2011. At BU, I was active in residence life for 3 years and I have been a tutor for music theory and music history since my second year. Outside of school, my hobbies are cooking, playing board games and watching football.

I joined band in grade 6 because my mother told me it would look good on my resume. Band and trumpet became much more than a spot on my resume, and I developed a passion for music as a soloist and ensemble member. I have performed with the Regina Symphony, the National Youth Band of Canada, the Ceremonial Guard Band and numerous Honour Bands in Saskatchewan.

I try to laugh and inspire laughter. I try to remember that the little things in life matter just as much as the big things. Saying hello to someone in the hallway or remembering a detail of their life can matter as much as being there in a time of need.

I have applied to several grad schools for musicology for the fall of 2015. I hope to complete a graduate degree and eventually pursue a doctorate. I would love to become a professor and model the example set by the professors who have inspired me so much throughout my degree.

Taryn is an excellent musician who approaches her studies with passion and commitment. She brings energy, insight, and a strong sense of professionalism to classroom, sectional, rehearsal, and performance environments.  Taryn is characterized by excellence in her musical and academic performance. She listens carefully, is reflective, and learns quickly. However, a recommendation for Taryn would be incomplete without recognition of the positive outlook and support she lends to her peers. She offers sincere feedback and encouragement to her colleagues and is referenced as a dependable and sincere contributor. She is respected by students and faculty in the School of Music and across campus at Brandon University.

Taryn is studious, hard-working, and highly motivated, as well as being passionate about learning about music and music history. She has always achieved the highest grade possible (A+) in my classes and has received an impressive number of scholarships each year since she began her undergraduate degree from both sources external to Brandon University and internal sources as well. She is very proactive in her learning and a strong leader, which is unusual for someone her age. Three years ago during Taryn’s first year, we had an unfortunate faculty strike here at Brandon University. Not one to sit idle, Taryn rallied the other first-year students to organize study groups in order to stay engaged with their studies. She has since been a music history and theory tutor for all levels of undergraduate music students at Brandon University, gaining a good deal of preliminary teaching experience.

I have witnessed Taryn’s growing interest in music research. She has had several summer jobs in museums and archives, which sparked her interest in Canadian history generally, and the history of bands in Western Canada in particular.

Taryn is quick to get involved in activities in school and in the community. She has been a member of several ensembles. She has also been a member of the St. Augustine’s Church Youth Choir and volunteers with the Brandon Festival of the Arts and the Brandon Jazz Festival. This fall, she took up the position of secretary of the Brandon University Music Students Committee. She has also been the student representative on Brandon University’s Senate. In addition, Taryn completed her first full-length solo trumpet recital last March and spent the past summer playing trumpet in the band of the Ceremonial Guard in Ottawa.