Are you a BU graduate who has written a book or do you know of someone who should be included? 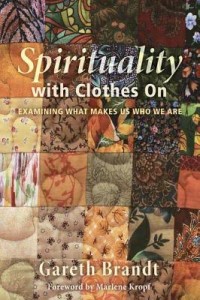 “There is no such thing as a naked spirituality. We cannot separate ourselves from our gender, personality, developmental stage, family, historical background, culture, or difficult experiences in our lives. We need to acknowledge all these things, reflect on them–and sometimes even embrace them–in order to truly become ourselves.”
Go to: wipfandstock.com/spirituality-with-clothes-on.html. 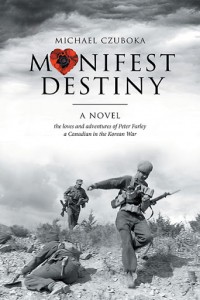 Manifest Destiny is a novel that is based largely on events that took place during the Korean War in the early 1950’s. Conflict, romance, mystery, the stigma associated with mental illness and humorous events take place. The cultural characteristics of the era, and especially those of the small towns of Canada and home of the main protagonist, are portrayed. The lives of the principal characters before, during and after the war are described. Peter Farley, the main protagonist, becomes romantically involved with several women, and especially with an American nurse in Korea. The Soviet Embassy in Ottawa recruits a Canadian communist fellow traveller to spy on Canadian Forces in Korea and his identity remains a mystery until near the end of the book. Combat occurs against the Chinese and North Korean communist forces in Korea. Peter Farley becomes a prisoner of war and returns to Canada to a difficult and uncertain future because his mind has been damaged by torture that he endured while in captivity.
Go to: www.friesenpress.com/bookstore/title/119734000023312468/Michael-Czuboka-Manifest-Destiny. 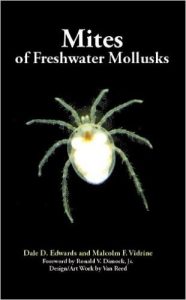 Often the least among us most inform us. Surely nothing is less than the minute mites that shun the light of day and seek the perpetual darkness of the mantle cavity of a mussel, which is completely buried head down in the mud of a stream or lake. Every aspect of their lives provides clues as to their origins and their travels. Thus these mites reveal lessons to those who ask questions of them-lessons on biogeography, evolution, ecology and conservation. As Darwin contended, “…whilst this planet has gone cycling on according to the fixed law of gravity, from so simple a beginning endless forms most beautiful and most wonderful have been, and are being, evolved,” these mites not only lived for 250 million years (since Pangaea) on evolving continents moving across the face of the planet but also lived in evolving mussels, which themselves were evolving with fishes and their kind. All these life-forms evolved complex interdependencies that continue to link them even today. Enduring evolving continents and evolving mussels in a swirl of informative chemicals, these mites have radiated into a myriad of diverse types of bodies and behaviors. Their diversity rivals other major groups of organisms and challenges us to understand their feats in order to make sense of it all. This book is an effort to tell the story of these mites. 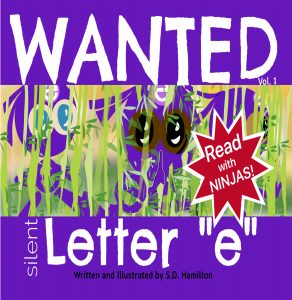 Sandra is a graduate of Sudbury Secondary School in Ontario. She led her team to win 3 O.F.S.A.A. titles (Ontario Federation of School Athletic Association – highest level of athletics in Ontario high schools). She later attended Sheridan College in Oakville, Ontario for a two year Fashion Technique and Design diploma course. Unfortunately, they had no basketball team!

Sandra later attended Brandon University from 1990-1994. She played as a Bobcat, from 1990-1993. She was a 2-time All-Canadian in 1992 and 1993. Sandra was the CIS top scorer in 1992 with a 22.5 points per game average. In 1992, Sandra was also the recipient of the prestigious Harry Jerome Award as the best female, black, athlete in Canada. (An award won by athletes such as Donovan Bailey and Lennox Lewis.) 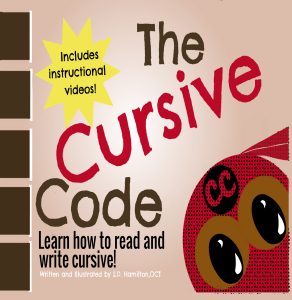 When she returned to Toronto, Sandra put her BU teaching degree into action. Her coaching and team building skills kicked in and she became excellent at classroom management–so much so that veteran teachers continued to ask for advice about how she was able to maintain a respectful and productive class.

Today, she is a published author/illustrator (S.D. Hamilton). Her picture books, WANTED silent letter “e”, WANTED letters “gh”, and WANTED letters “ph” are purposely designed for reluctant readers and those that love reading about mindful ninja shenanigans. Reluctant readers and avid readers will have fun learning about the different sounds and rules of these letters not realizing they are learning! Within most pages there are hidden ninjas one must find! Sandra also uses My Personal Dictionary in her class. Students write commonly misspelled words inside. Lastly, she has created a book for children/Adults to learn how to handwrite called, The Cursive Code. This book has access to free, handwriting, video tutorials so that kids can learn on their own.

Sandra believes what the students read in class is so important for classroom management! These books are already a hit with her school!

Her upcoming books will be about teaching teachers how to “coach” their students and how to write and publish a book.  To purchase books go to: www.amazon.com/author/sdh. The books are a great gift and a great resource for educators and caregivers!

Sinai Surgeon is an historical narrative of a military surgeon’s experiences and adventures with the United Nations Emergency Force (UNEF) in the Sinai desert during 1966-67, the year leading up to the Six Day War between Israel and Egypt. It focuses on the realities of Peacekeeping in  the Gaza Strip and the Sinai, an area of the world which is still a hotbed of interest today and a key feature of Canadian military history.

The book highlights the Canadian Peacekeeping role which is currently a major concern to Canadians as well as most international organizations and states and people interested in Canadian military history. The role of the Canadian military as Peacekeepers in the Sinai, an initiative of Lester Pearson that was to become Canada’s identity on the international scene, is highlighted as the author was a medical officer in the RCAF seconded to the UNEF serving with a division of the Canadian Air Force, 115 Air Transport Unit stationed in El Arish Egypt. The medical aspects of the hazards of desert life, caring for soldiers in isolated circumstances as well as the life and medical needs of a unique nomadic population group, the Bedouin are described.  Go to: www.sinaisurgeon.com. 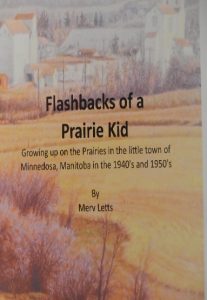 Flashbacks of a Prairie Kid an historical narrative of growing up in a small Prairie town during the war years and the 50’s decade following. It documents many childhood memories of the times, events, celebrations and customs of Prairie life. Anyone who grew up on the Prairies anywhere in Canada or the United States will relate to this book and enjoy its content. The book is profusely illustrated in color with 575 pages, soft cover with perfect binding…an enjoyable read even if you didn’t grow up on the prairies! 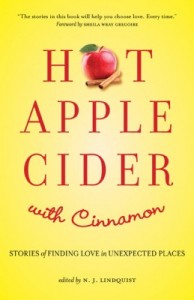 In a world that seems consumed with busyness and fear, the heartfelt stories in Hot Apple Cider with Cinnamon invite readers to a quiet place and remind them how simple acts of love can make a lifetime of difference.

In the book’s foreword, Ontario author and speaker Sheila Wray Gregoire says, “Real love is seeing your neighbour, your family, and your friends with new eyes. It’s deciding to laugh, to love, to live in the knowledge that pain in the world is inevitable, but love is a choice…. The stories in this book will help you choose love. Every time.”

Hot Apple Cider with Cinnamon: Stories of Finding Love in Unexpected Places is sold in both print and digital format. To see all the books in this series, go to: hotappleciderbooks.com.

The Government of Edward Schreyer, Democratic Socialism in Manitoba. A fresh perspective on the role of democratic socialist ideology in Canadian politics emerges from this study of the first NDP government of Manitoba (1969-77). The policies and performance of the administration headed by Edward Schreyer are evaluated in the light of what might be expected of a social democratic party in office. Measured by such criteria as the redistribution of wealth, the growth of public ownership, the extension of government planning, and the public participation in decision making, the achievements of the Schreyer government fell short of the expectations of its supporters and the good intentions of socialist ideology. 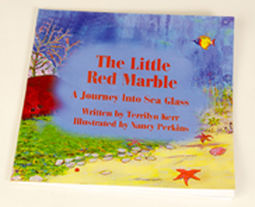 Terrilyn lives on Prince Edward Island and is inspired every day by the sights and sounds of the Island waterways and shores.
Go to: www.amazon.ca/Little-Red-Marble-Journey-Glass 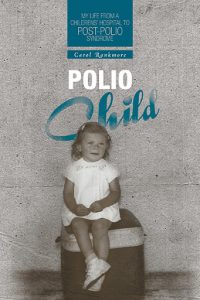 During the 1940s and 50s, Canadian families lived in a state of panic, trying to shield their children from being infected by the often deadly and very widespread disease: poliomyelitis. No one knew how it was transmitted; no one knew why a child was infected. Journey with Carol Rankmore as she tells her story from polio survivor to the previously unknown condition now called Post-Polio Syndrome. Her sensitive memories of childhood coupled with wry humour and historical background make this book a must-read memoir that has major implications for ageing polio survivors today.

Despite her medical trials, Carol’s memoir is one of hope. With frank insights into the challenges of PPS, this book offers the possibility of managing it successfully through careful exercise, a determination to never give up and a positive attitude. Polio Child will prove an invaluable resource for those living with—or care-giving for someone with—Post-Polio Syndrome or other disabilities. Go to: www.friesenpress.com. 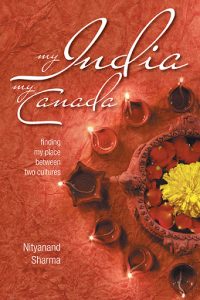 During Sixties, an English teacher in Jaipur, India, perceived that his wife, Kamla, who had only Matriculation, needs some training in formal dancing in banquets, and dinner table setting, before joining him in Canada. So Kamla got trained, before joining him after two years.

The story is from an immigrant’s point of view, and all Canadians, and Indians everywhere should read this interesting story with beautiful pictures to enjoy, as the times are changed, but perspectives may still be the same for new comers. It’s a great universal read.

Nityanand Sharma arrived in Canada on September 9, 1968. He had a Masters Degree in Economics and Public Administration from the University of Rajasthan, Jaipur, India before he was awarded a scholarship by Brandon University to complete an Education 1 Diploma to teach secondary schools in Manitoba. He was granted a two-year visa –one year as a student and a second year as a teacher. He also earned a Pre-Master’s Degree in Education Administration during his career.

Nityanand Sharma has been a leader in the schools as a teacher and in the Education Office as an administrator and also a volunteer in the community. He loves Canada as his home. Go to: www.friesenpress.com.

Arnold Tweed is a son of the prairies.  He grew up on a farm in southern Manitoba, went to High School in Killarney, and graduated from Brandon College in 1959.  His early ambition was to be a cowboy, but he got side-tracked and graduated with an MD from the University of Manitoba in 1964.  Since then, he has forayed into several medical fields: general practice, emergency medicine, intensive care and anesthesiology as well as attempts are medical research, teaching and medical administration – and more recently writing medical memoirs.

Never having abandoned his early yearning for the carefree cowboy life, he has travelled widely, and has worked in Canada, Denmark, New Zealand, Oman, Bahrain, Saudi Arabia, and Nepal.  His travels and diverse medical ventures have been well rewarded.  Some of the most important lessons he has learned about medicine have come from chance encounters with unusual patients, unique characters and strange medical situations.  MEDICAL MISADVENTURES builds on some of those experiences.