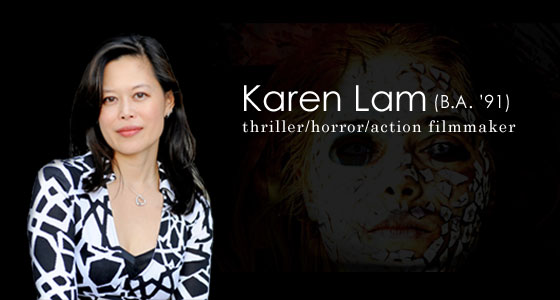 For updates on Karen Lam’s contribution to the film industry, visit imdb.com.

Karen Lam (B.A. ’91) is no fan of sappy, happy-ending chick flicks. In fact, she has a penchant for genres that do not, as a rule, appeal to women. She credits her upbringing in Brandon along with listening to heavy metal and watching slasher movies as a teen for her focus on the darker side of human nature.

As a Canadian woman of Asian heritage who wants only to write and direct thrillers, horrors and action, I’m kind of a weird duck,” Karen said. “Funnily, I’ve become the inadvertent poster girl precisely because of my “dark side.” Women in leadership roles in film and television are nearly non-existent and women are even less prevalent in this genre. Apparently, we’re not supposed to like horror, action or other so-called “male” movies. Personally, I hate romantic comedies — I think they’re insipid — and definitely prefer Saw over Sex in the City.”

A frequent visitor to the campus — her father Dr. Jack Lam taught in the Faculty of Education — Karen had spent a great deal of time at Brandon University as a teen. Being a piano student, for instance, she often attended recitals at BU featuring music majors and on occasion, she was one of the performers.

“And every Sunday night, art films and foreign films were played in the Little Theatre or the Evans Theatre, giving me a lifelong appreciation for Bergman, Fellini, and the foreign films I had to read,” she said. “I may not have understood The Seventh Seal in high school, but it sure made Bill & Ted’s Bogus Journey that much better!”

Unlike many young people, she was not in a rush to leave her hometown. So, after high school, Karen enrolled at Brandon University, where she majored in English, with a double minor in history and religion. Along the way, she had the opportunity to spend summers in different universities — of Victoria, of Western Ontario and of Toronto. As well, she followed her studies at BU with a year in the fashion design program at Ryerson University, then in a completely new direction, she went to the University of British Columbia for a law degree.

“I had a deep terror that I was going to be a professional student, but I wouldn’t have traded my educational experiences for the world,” she said. “It really taught me to appreciate what a special place Brandon University is. After experiencing six universities and various programs of study, I can honestly say that BU was probably the best experience I ever had in post-high school education. The campus is small but convenient, the professors know you by name, and you really feel like you’re part of campus life. Because the class sizes are manageable, even in first- year introductory classes, I always felt that the instructors were accessible and that they cared enough to push you to excel.”

She recalls a few particular experiences at BU that have helped shape the professional she is today. Originally wanting to major in music, Karen’s plans shifted after a conversation with Dr. Lorne Watson. A gifted pianist, she was asked if she had the ambition and dedication to become a professional musician.

“At the time, it was a devastating conversation, but he was right in questioning me. I didn’t have the drive, but was merely coasting and it wouldn’t be good enough to succeed on a professional level. It was important to acknowledge it immediately, rather than a few years down the line when I had wasted everyone’s time, including my own,” she said. “It was a difficult decision, but I switched into the English Department and have never regretted it. I owe a big debt of gratitude to Dr. Watson. The most important life decisions we make aren’t the ones that are easiest, and I’m grateful for his astute assessment.”

Another lesson learned at BU stands out in her mind to this day. Though it was also unpleasant at the time, receiving a “B” for an essay she had written for Dr. Trevor McNeely was a pivotal experience.
A demanding teacher, he had nevertheless graded her previous work much more favourably.

“I immediately went to see him to figure out what was wrong. He admitted that there was actually nothing wrong with the paper per se, but that he knew that I had turned in a much better paper for my mythology class with Dr. Susan Medd. In short, he knew I could do better,” Karen said. “Of course, I was incensed. As far as I could see, this wasn’t fair.”

However, she discovered this lesson was invaluable. She eventually realized that her professor cared about her and her learning, and that he judged her by her own standards. There was no getting away with passable work.

“He measured me against my own yardstick, and it’s an experience that has stayed with me throughout my working life. I never ask: ‘Is this good enough? But, have I done my best?’” she said. “I asked that of myself again recently when it came to my film career: Did I want to write and direct badly enough to deal with all the sacrifices? And there are a lot of those! If I couldn’t answer “yes”, then I have no reason to succeed. If you’re going to try to succeed in the arts, there are no half measures.”

According to Karen, these experiences along with her years of studying at Brandon University have had such a profound impact that she feels that this is the foundation of her film career. In hindsight, she knows that her professors’ encouragement and caring challenged and inspired her to set high standards for herself.

“Ultimately, everything that I’ve been able to achieve in my career stems back to my time at BU,” she said, adding that though she has been living in Vancouver since 1992, she still considers herself to be a Prairie girl at heart. “BU is literally who I am, as is my hometown of Brandon.”

Along with raising her expectations of what she could accomplish, Karen stated that another important element that she traces back to those undergraduate years was the development of critical thinking skills and the exploration of new ideas or interests.

“As a writer and director of fiction films,” she said, “I can thank the faculty at Brandon University for encouraging me in my creative writing, introducing me to opera which I still love, forcing me to read dark and depressing Canadian and American literature, inspiring me to learn about world religions — my horror scripts have a strongly religious bent to them — and introducing me to art films.”

Karen Lam’s first short film as a writer and director, The Cabinet was chosen as one of five projects across the country through the National Screen Institute – Drama Prize, which gives funding and training to new writers, directors and producers. The short film was played at more than 15 festivals worldwide, shortlisted for prizes at a majority of those events, and has been chosen as a Canadian selection by Air Canada.

She received further training through the National Screen Institute – Totally Television program for a television series idea that she created in 2007, and she was chosen for the Banff Centre Women in the Director’s Chair program, as one of eight directors countrywide in 2008-09 and was mentored by Kari Skogland.

Her first feature film Stained was shot in the fall of 2009 in Saskatoon, with a $1 million budget and it premiered at the Cannes Film Market under the Telefilm “Perspective Canada” showcase. It is currently showing on Superchannel. Karen is in negotiations for the world distribution rights.

In March 2011, she completed a short horror film entitled Doll Parts and she has been invited to the Viscera Film Festival, which showcases women horror directors in Los Angeles. The film has been nominated for three awards including Best Direction and Best Picture, and will be screened at other festivals and university campuses across the United States. At print time, she was in pre-finance mode for two new feature films.