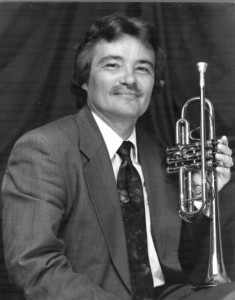 Dr. Edward Bach joins the Brandon University School of Music after a distinguished twenty-one years as trumpet professor at the University of North Carolina at Greensboro. Bach holds the Masters and Doctoral degrees from the University of British Columbia in Vancouver. He was the first person to receive a doctoral degree from a Canadian university studying with Martin Berinbaum. He received his Bachelor of Music degree from Brandon University as a student of Alan Ehnes. Bach received international acclaim as the principal trumpet in A Touch of Brass, a Vancouver based group that performed concerts in Moscow, the Ukraine, Hong Kong, Singapore, Australia, India, England, Latvia, as well as many cities in North America. When moving to North Carolina in 1991 Bach became the leader of Market Street Brass, a brass quintet comprised of faculty members from UNCG. Under his direction Market Street Brass has become one of the most accomplished chamber groups affiliated with a university traveling throughout the United States and regularly to China. The group is managed, when in China, by the Forbidden City Hall Concert Management Company and has played many of the major concert venues in the country.

A prolific recitalist, Bach’s solo appearances include performances in Vancouver, Quebec City, The Kennedy Center, Budapest, Portugal, New York, Scotland, Tampa, Winnipeg, San Antonio to name a few. Solo appearances in the 2011-2012 included appearances in Canada, Scotland, Florida, North and South Carolina, Virginia, Georgia, New York, Tennessee, and West Virginia. Many of Bach’s solo recitals feature a first half of classical music for trumpet and piano followed by a second half devoted to a Tribute to Louis Armstrong. As a much sought after master clinician Dr. Bach has worked with students at the Moscow Conservatory, the Central Conservatory in Beijing, the Liszt Conservatory as well as many Canadian and American universities. Bach is heard on the recordings, Infinity and Contrasts, both of which feature some of the most virtuosic trumpet music in the repertoire and have received widespread critical acclaim. He recently completed another trumpet and piano cd which features wonderful settings of some of the most popular hymn tunes ever composed. Dr. Bach is sponsored by the Eastern Music Company.