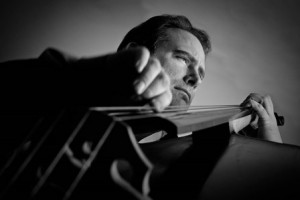 Steve Hamilton has been an active member of the Manitoba music scene for over 30 years, as a music educator and bassist.

Steve has a degree in Classical Double Bass from the University of Manitoba. He has done additional studies with Joel Quarrington at the Royal Conservatory in Toronto  and with Hal Robinson at the Peabody Conservatory.

In 1997 Steve was awarded a Manitoba Arts Council Grant to study with Marc Johnson in New York. He has also studied with Dave Young, Michel Donato, Mike Richmond and Elaine Elias.

Steve has been a Band Director in the St James Assiniboia School Division since 2002. He has taught at John Taylor Collegiate since 2010.

Steve is a well-respected bass teacher, producing many talented students over the years; some have gone on to study at Julliard and the Manhattan School of Music. He is known for his comprehensive and holistic teaching style.

Steve was awarded the Xerox Jazz Educator of the Year in 2008. He has also taught at International Music Camp, Manitoba Conservatory, Canadian Mennonite University, University Of Manitoba Preparatory Studies and the University of Manitoba Jazz Camp.

Over the years Steve has had the chance to play with many visiting jazz artists such as Scott Hamilton, Jon Faddis, Eddie Henderson, Jim McNeely and Ranee Lee. Steve has been the Jazz Bass Instructor at Brandon University since 2014.