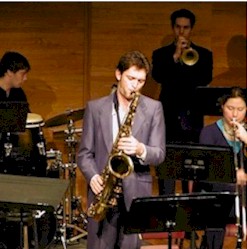 “Are We There Yet?

Averaging thirty musicians strong, the Brandon University “Gigantic Band” is just as its name states.  Comprised primarily of first and second-year students in the School of Music,  the Gigantic Band performs an eclectic range of repertoire (including compositions by Pat Metheny, Duke Ellington, Jelly Roll Morton, Charles Mingus and Matt  Harris, amongst others) with a focus on developing the foundational skills of university-level big band playing. Featured each year as part of the Brandon Jazz Festival, the Gigantic Band also performs regularly in the Brandon community and in western Manitoba. The Gigantic Band is under the direction of drummer/percussionist Eric Platz, anative Bostonian and recent addition to the faculty of the School of Music.