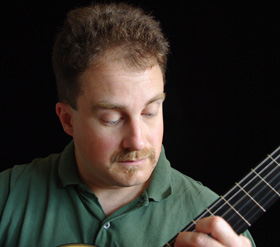 Paul has been teaching at the Eckhardt-Gramatté Conservatory of Music since 1995, and has had the directorship of the Brandon University Guitar Ensemble since 2006. His academic credentials include a Bachelor of Music degree from Brandon University and a Masters degree in Classical Guitar Performance from Brisbane, Australia’s Queensland Conservatorium. Some of Paul’s past performance highlights include two short periods of intensive study with American pedagogue Bruce Holzman, and masterclass sessions with the Los Angeles Guitar Quartet, Leo Brouwer, Ricardo Cobo, Lily Afshar, the Sydney Guitar Trio, Denis Azabagic, the Z.O.O. Duo, Stephen Robinson, Kevin Gallagher, Daniel Bolshoy, and Philip Houghton. In 2010, Paul released his second CD, Tone Colour Paintbrush. He is also an accomplished arranger and music engraver, with several self-published works to his credit.

When not teaching, practicing, or performing, Paul can often be found indulging his mid-life crisis on or near a soccer pitch.