Affect(ing) music: To build a ghost house on your territory

In June 2018, Peter Morin and Aaron Wilson were asked to perform at the Savvy Contemporary Gallery in Berlin, Germany. The two performances addressed decolonialism and collaboration across disciplines and cultures.

Collaboration between Indigenous and Western artists is a profound way to promote healing from colonialism. Our two methods for performance, the hand drum and the trombone, are perceived to be at crossed purposes because of their specific histories. Collaboration between the trombone, what Beethoven and other classical composers referred to as the “voice of God”, and the hand drum, referred to as the “heartbeat of the nation” in Indigenous cultures, should not exist. To present this new song, especially on foreign soil, we needed to build a new space for it. We referred to this as the ‘sonic ghost house’. It was a space for us to honor both of our performance practices and to address the regrettable history of colonization. Through this performance, we hoped that we, and our audiences, would find understanding, connection, beauty, and healing.

The combination of Indigenous and Western music has been growing in popularity primarily with some very talented Indigenous musicians. Collaboration between brass and Indigenous music, however, is virtually non-existent. In our first performance at a Brandon Chamber Players concert, Peter and I figured out a few ways in which we could combine our two performance practices. For our performances in Berlin, however, we wanted to tell a bigger story.

This story was not just about celebrating two cultures, but also celebrating friendship. Peter and I have been close friends since 2014, and we had been looking for an opportunity to collaborate for two years. Over the years, we both have learned a great deal about each other’s cultures and performance practices. It was this close friendship that helped us find common ground between our two very different disciplines. Our performances combine music, movement, and ceremony in a loose structure with much improvisation.

In the first of our two Berlin performances, we told the story of colonialism. Peter sang traditional songs along with his hand drum, and I performed sea shanties and the actual piece of music that Christopher Columbus and his crew sang upon reaching the New World. This developed into confrontation, conflict, and musical shouting between the two of us representing the painful history of colonialism on the North American continent. This conflict was unsustainable, and after working ourselves into utter exhaustion, we needed to find healing. Peter healed the trombone piece by piece while echoes of Columbus’ song rang through the increasing dismantled instrument. Once all pieces were healed, we wrapped the instrument in a blanket and let it rest overnight. In our second performance, we unwrapped and reassembled the trombone and performed improvised songs together celebrating friendship and reconciliation, concluding with both of us singing into the trombone.

We want people to be more open to collaboration across cultures. The tragic history of colonialism has made it difficult for new partnerships to be forged. It takes effort and continued communication to heal those wounds, but beauty can emerge out of this effort. We both encourage others in all disciplines to follow our example and make something new through collaboration and understanding. 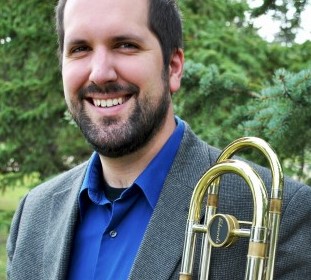 Originally from the United States, Dr. Aaron Wilson joined the faculty at Brandon University’s School of Music as the Assistant Professor of Low Brass in 2014. Dr. Wilson keeps a busy performance schedule and has appeared with several professional ensembles across North America. Additionally, he was a featured performer at the 2018 International Trombone Festival in Iowa City, Iowa.

Peter Morin is a Tahltan Nation artist, curator, and writer. In his artistic practice and curatorial work, Morin’s practice-based research investigates the impact zones that occur when Indigenous cultural-based practices and Western settler colonialism collide. Peter Morin is an Associate Professor at OCAD University in Toronto.