Let’s talk about circumcision and masculinity

To circumcise or not to circumcise? Expectant parents often find themselves tackling this question. The answer to the question is complicated by diverse medical opinions, religious traditions, and secular norms. This project sets out to understand how the foreskin is represented, theorized, and critiqued in the social sciences and humanities, in the biomedical sciences, and in policy documents of medical associations. When completed, this project will be one of the first full-length studies to consider circumcision by way of the foreskin as well as what it is, what it does, and why it matters.

The foreskin and its presence—or absence—has a long history and has divided religions and cultures for millennia. However, in the late nineteenth century, the debate moved from a religious debate to a secular debate. “It’s not normal,” declares Charlotte in an episode of Sex and the City; what’s not normal, she insists, is the foreskin (despite the fact that the vast majority of the population, worldwide, has a foreskin). The foreskin has become, in our times, hotly debated, deeply suspicious, ephemeral, enigmatic, perhaps a mere curiosity. The debates over “to circumcise or not” are so complicated and so vexed that one hardly knows where to begin. As such, this project asks: what are the secular reasons to circumcise?

How this research is being done

To complete this research, I am reviewing material from a wide-range of sources. If you were to come into my office, you’d likely find stacks of medical articles alongside What to Expect When You’re Expecting and other pregnancy books. Simply put, the first challenge is to figure out who is talking about the foreskin (and circumcision) and for what reasons. Nearly every pregnancy book, for instance, has some sort of opinion on the foreskin. From this vantage, I begin to track and catalogue how we think about the foreskin and its removal.

Over the summer of 2016, thanks to funding from the Brandon University Research Committee, I spent a great deal of time at the Wellcome Library (London, England), which is a library devoted to the history of medicine, and the British Library. While there, I reviewed and studied everything from dissertations to manuals about safe sex, books about puberty, and activist literature (there is a growing body of “intactivist” literature!). In coming months, I hope to do more archival research at the Kinsey Institute at Indiana University, USA.

I am still in the early stages of this research, but I have found that the most commonly cited reasons for circumcision include: “to look like dad” or “to look like peers.” Thus, the arguments are not religious in nature, nor are they oriented towards health, they are about social inclusion, or even, about aesthetics. As such, I’ve written an article on “foreskin aesthetics,” which tackles the idea that the foreskin is ugly. If we look at the history of art, the male nude is almost always not circumcised. Even Michelangelo’s David has his foreskin!

This research will be of value to various stakeholders, including parents, medical doctors, and theorists and scholars of gender and sexuality, as well as people who are curious about the politics of circumcision. Ideally, this research will participate in policy discussions around routine neonatal circumcision, especially since this research aims to provide a full-length study of the foreskin. 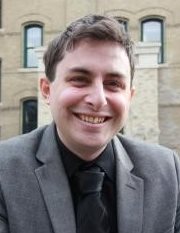 Dr. Jonathan A. Allan is Canada Research Chair in Queer Theory and Associate Professor in the Department of English and Creative Writing and the Gender and Women’s Studies Program. He is the author of Reading from Behind: A Cultural Analysis of the Anus (University of Regina Press, 2016) and, with Cristina Santos and Adriana Spahr, editor of Virgin Envy: The Cultural (In)Significance of the Hymen (University of Regina Press, 2016).