More accessible muscle growth for all?

If you have ever been on the losing end of an arm wrestle, then without knowing it, you have already performed a maximal eccentric contraction. Eccentric contractions occur when your muscle is being lengthened while you are performing a muscle contraction. Think back to losing the arm wrestle, you are trying to move in one direction but the force you are pushing against—your opponent’s strength—is overcoming you and pushing you the opposite way. Such contractions also occur every time you engage in resistance training such as lowering the bar down to your chest during a bench press or controlling your body down to the floor during a push-up. Advanced weight lifters have long enjoyed the beneficial effects of maximal eccentric contractions for increasing muscle mass. Professor Krentz’s recent research sheds light on the potential use of submaximal eccentric training to increase muscle mass in populations that might benefit from increased muscle mass but may otherwise have difficulty achieving it.

A wide range of populations will directly benefit from increasing muscle mass. Often we think only of athletes or hulking bodybuilders as those whose goal it is to achieve increases in muscle size. Frequently forgotten are the elderly populations experiencing sarcopenia (loss of muscle) due to aging or various clinical populations suffering from disease induced cachexia (weakness and muscle loss due to illnesses such as cancer). For these and many other populations increasing muscle mass is vital for health and in performing day to day activities in order to maintain independence.

Training that is done to increase muscle mass often requires high levels of exertion and may be intimidating and of limited accessibility to those who need it most. To date, very little is known about the potential of lower intensity (submaximal) eccentric training to induce muscle growth.

This research utilized a randomized, controlled, experimental design. Thirty-one young adults (13 females, 19 males) were randomized to either a high intensity eccentric training group, a lower intensity eccentric training group, or a control group (which did no training). Training was conducted on the elbow flexors (biceps) and was performed 2-3 times per week for eight weeks. Muscle thickness of the biceps was measured using ultrasound before and after the eight weeks of training. Ratings of perceived exertion were self-reported on a scale of 1-10 after each workout and served to indicate how hard each workout was perceived to be by the participants. Muscle soreness and changes in muscular strength were also monitored.

Although preliminary in nature, this work has identified some key steps in eventually applying eccentric training of lower intensities to more diverse populations. This was a proof of principle study performed on healthy college-aged students and only trained a single muscle group (biceps). Therefore, future work should look to extend these results to more clinically based populations and with more full body exercise regimes. Nonetheless, this work excitingly suggests that populations who struggle to train with heavy weights may be able to utilize submaximal eccentric training and still see similar increases in muscle mass. Professor Krentz’s current research continues to investigate adaptations related to high versus low intensity training of varying contraction types with the hopes of determining more optimal training prescriptions for various populations with specific training goals and limitations.

This research project has been approved by the Biomedical Research Ethics Board of the University of Saskatchewan. 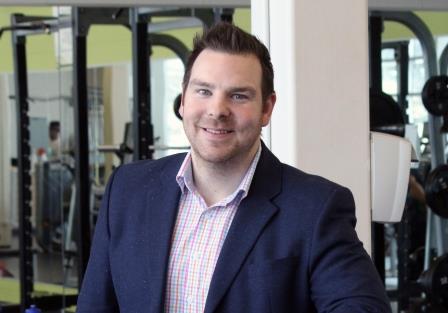 Making his way to Brandon from the University of Saskatchewan, Joel is currently in the process of completing his Ph.D. in Kinesiology with a specialization in applied exercise physiology. He is an Assistant Professor in the Department of Physical Education at Brandon University. As outlined above, his current research focuses on the effects of contraction type and training intensity on strength and muscle growth. In addition to his academic work as a professor, Joel is a Certified Exercise Physiologist through the Canadian Society for Exercise Physiology (CSEP) and has worked as a strength and conditioning coach with numerous professional and high-level amateur athletes. In his leisure time, Joel enjoys working out and playing baseball among other sports.