A genetic disorder unique to the Prairies—Bowen-Conradi Hutterite Syndrome—is part of a group of diseases called ribosomopathies. These disorders, which include many cancers, are due to the incorrect assembly of ribosomes. Large molecular machines, ribosomes “read” our genes and synthesize the corresponding proteins that make up most of our body. We also know that cancer cells increase ribosome assembly in order to meet the greater protein needs of growing cancer cells. We developed model systems of Bowen-Conradi Syndrome and cancer using baker’s yeast. We found that Bowen-Conradi Syndrome slows cell growth and changes the structure of ribosomes. We have also potentially identified new regulators of ribosome assembly and cell growth in cancer. These allow us to propose and test the first treatments for Bowen-Conradi Syndrome and new targets for cancer chemotherapy.

Bowen-Conradi Syndrome (BCS) is a genetic disease only found in the Hutterite population. Children born with this disease fail to grow and die in infancy. They carry a defect in a protein called Emg1 involved in the assembly of ribosomes. As tiny molecular machines in our cells, ribosomes “read” our genes and make all of the proteins in our body. This makes BCS a ribosomopathy—a family of diseases caused by misassembled ribosomes which also includes many cancers and North American Indian Childhood Cirrhosis (NAIC)—a form of liver failure only found in Ojibway-Cree First Nations children from northwestern Québec.

Cells need ribosomes in both normal (e.g., adolescence) and abnormal (e.g., cancer) growth. How cells decide to increase ribosomes is unclear. Our lab also studies protein kinase CK2, a group of proteins we believe are part of the ribosome assembly machinery and which may act as a “dimmer switch” for ribosome assembly. CK2 is more abundant in cancer cells than in normal cells, and experimental chemotherapies target CK2.

We used the baker’s yeast, Saccharomyces cerevisiae, as a “model organism” in which we re-create the disease. This is because yeast is easy and inexpensive to grow. We can also genetically engineer yeast cells to ask detailed questions about the role that these proteins play in the cell—all things that are much more difficult and expensive to do in human cells.

For BCS, we found that the cells grow more slowly, implying a problem with assembling ribosomes. We then found that the structure of the ribosomes had changed, which may result in slower and/or error-prone ribosomes. Recently, we showed that the BCS Emg1 is no longer able to interact with its main partner, the ribosome assembly protein Utp2.

For the role of protein kinase CK2 in the regulation of ribosome assembly and growth in cancer, we found that the four proteins that are part of CK2 play different roles. Two of the proteins (b1 & b2) are unnecessary. Loss of either of the other two proteins (a1 & a2) results in slowed growth, likely due to slowing of ribosome assembly while losing both is lethal.

With BCS, better understanding the problem has already helped us propose the first treatments that may reduce disease burden or progression. We will be testing these drugs soon in our yeast model.

With CK2, this work will provide insight into the regulation of ribosome assembly and cell growth (known to be a problem in cancer) and may provide new targets for chemotherapy. 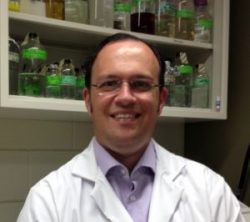 This work has been presented at CancerCare Manitoba, the Children’s Hospital Research Institute of Manitoba Annual Meeting, the RiboClub, and the CIHR New PI meeting.