Can ancient Arctic swamp forests help us predict the effects of climate change?

Current global climate change is predicted to have drastic impacts on plant ecosystems, especially in the Arctic. The long-term responses of plant ecosystems are difficult to predict due to complex variables affecting plant migration and adaptation, so we palaeobotanists look to the fossil record for modern analogs—evidence from past warming events in Earth’s history.

The high latitude regions are warming much faster than the rest of the world due to climate change from rising levels of greenhouse gases, and polar ice caps are disappearing at an alarming rate. Because of rapid climate change, there is great concern about how plant communities will respond. The geological and fossil records provide us with insights into past global warming events in Earth’s history that we can look to for clues about possible future changes. Much like today, 56 million years ago during what geologists call the PETM (Paleocene-Eocene thermal maximum), global temperatures rapidly rose to levels so high that the poles were ice-free and palm trees grew in Arctic swamps into a period of warmth due to much higher than present-day greenhouse gases. We are studying ancient swamps that are preserved as coals at Stenkul Fiord, Ellesmere Island, Nunavut, which contain fossilized plant pollen and spores of the plants that lived during this time in the Arctic. Understanding how local climatic conditions changed during this global event, and how those changes affected the structure and diversity of these ancient forests, will give us an idea of what to expect in the future over relatively longer time-scales.

Our team conducted a field expedition to Stenkul Fiord in the summer of 2017 in cooperation with the Canadian and German Geological Surveys. In the High Arctic, we had to be on the lookout for polar bears, with daily work collecting samples on a beautiful, endless, and barren landscape. As there is very little vegetation, we walked along the exposed rocks and measured the different layers of sediments using surveying equipment and took samples of the coal every 100-150 cm. Each sample within a layer represents a unique snapshot in time (older at the bottom, younger at the top).

Back in the lab, samples were processed to extract the fossil pollen to make microscope slides, which were then viewed for identification and counting to determine the abundances and diversity of different plant types in the different layers. The times of the first and last appearance of these plant types in the vertical sequence allows us to see their responses to rapidly changing climates. Plants are adapted to certain types of climates and require a certain temperature range to be able to survive and to reproduce. When climates change, plant habitats shift into areas that are suitable for growth.

By looking at our results, we can see when it was warm enough for some species to move up into the high Arctic and when it was either too warm or too cold for certain plants to exist. 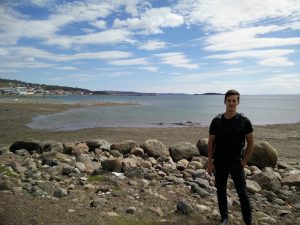 Our analysis showed how over ~1 million years Arctic plant communities gained warm adapted plant species in response to global warming and lost these unique plants species associations during cooler intervals. This allowed us to examine changes in plant communities in response to rapid climate change. Plants seen in these coals include species that are common to eastern North America, such as alders, elms, hickories, walnuts, chestnuts, pines, firs, and even swamp cypress trees like those in Florida.

The results of this research will contribute to our understanding of Arctic environments of the past; most notably the responses of plant communities to global climate change over timescales, which are too long to observe in the modern world.

Studies like these will serve as useful perspectives when making informed decisions regarding policy on current climate change.

Markus Sudermann is a graduate student in the Master of Science (Environmental and Life Sciences) program (MELS) and has a B.Sc. (Hons) in Geology from Brandon University.

A professor at BU since 2004, and originally from Australia, Dr. Greenwood is an expert in using fossil plants to reconstruct ancient climates. He has published 80 peer-reviewed research articles reconstructing ancient environments and identifying plants from the fossil record. He has a Ph.D. and a B.Sc. (Hons) from the University of Adelaide.