Brandon University has identified various opportunities to grow its physical footprint to neighbouring or satellite sites, to increase the opportunities for the University and the wider community. The purchase of the Fleming School Site is an opportunity to increase and diversify student housing in close proximity to the campus. The presence of the Faculty of Health Studies Psychiatric Nursing Department on the Winnipeg Campus provides an opportunity fill a needed service for the community in the City of Winnipeg. The acquisition of the Brandon University’s Downtown Campus lands is intended to revitalize the downtown core as well as increase academic and community services and amenities for the City of Brandon. The aspirations of the University for all of its land holdings and satellite institutions, is to create quality and attractive environments to benefit the Brandon community and beyond, and to achieve its strategic academic, social, environmental, and economic goals and objectives.

The University is currently initiating an expansion to the Faculty of Health Studies Psychiatric Nursing Department. A new learning laboratory is being added to the current faculty space at an upper level in the building, which allows for more wiggle room for current faculty and staff uses. In the near future, the University needs to explore opportunities to relocate the faculty in a location on the Winnipeg Campus that will provide an attractive quality learning environment in keeping with the recommendation of the Campus Master Plan. This would include:

The Fleming School Site will be the location of new family student housing for the University. The site is within a five-minute walking distance from the Campus. Connectivity and ease of access to the site is an important factor in the Campus Master Plan. Consideration has been given to creating a clear view corridor along Louise Avenue to the Fleming School Site as well as recommending the pedestrianization of Louise Avenue as a connector through to the neighbourhood west. 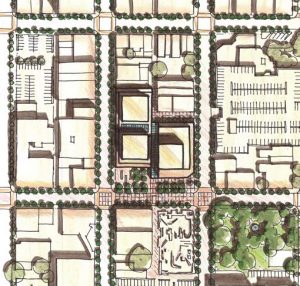 Brandon University has embarked on a path to establish a presence in the heart of Downtown Brandon. This will entail the acquisition of properties to form a consolidated parcel of nearly 70,000 square feet of land for future development. The land parcels are located on the 100-block within the Downtown core, between Ninth Street and 10th Street. This is an exciting development that will be transformative for both the University, the downtown area, and for the entire city. This new initiative opens the door to a multitude of opportunities including: advancing the University’s Academic Plan; enabling the implementation of the Campus Master Plan; and, meeting student and senior housing needs. This initiative will be catalytic for the future of downtown Brandon as it represents one of the most significant developments for the University and City in several decades.

In 2016, Brandon University announced that the initiative to expand the University’s footprint downtown was approved by the City of Brandon and Renaissance Brandon. This initiative was sparked by the generous decision of Landmark Cinemas to make the former Strand Theatre available to the University, bringing all interested parties to the table to develop a collaborative vision for downtown.

Serving the Community and Beyond

Brandon University has been serving the community as a post-secondary institution for over 115 years, providing education, amenities, and services. 2017 is an important year, as the institution celebrates its 50th year anniversary as a University. The initiative therefore has happened at an opportune time, as it represents an exciting new chapter in growth for the University that  together with the Campus Master Plan, will play a key role in shaping a direction for the University over the next 20-30 years. It is also an important initiative for the City as the University will play a key role in revitalizing Brandon’s downtown. Working with the community, through the development of the BU Downtown Plan, the University will act as a catalyst for growth, innovation, and revitalization.

Specifically, Brandon University’s Downtown Campus will meet some very specific needs of the University and its community. It is intended to: