Sketching the shape of space and time

Élie Cartan was born in 1869 in the village of Dolomieu in southeastern France. The son of the local blacksmith, his mathematical ability was recognized soon after he started school. After his studies in Paris, he became a professor at the Université de Paris-Sorbonne and established himself as one of the preeminent mathematicians of Europe. In 1938, he proposed a geometric approach aimed at creating a classification system—a taxonomy—for the differential equations of calculus. His system depended on finding solutions to an equation, which—because of its exceptional complexity—proved intractable.

My colleague, Dr. Tina Harriott from Mount Saint Vincent University, and I are working on the null-surface formulation of general relativity, which provides a new framework for Einstein’s relativistic theory of gravity. In low dimensions, to be precise: two dimensions of space and one dimension of time, the main equation of the null-surface formulation turns out to be identical to Cartan’s remarkable equation of 1938.

The null surfaces that arise in the null-surface formulation of general relativity are central to both Einstein’s geometric approach to gravity—where null surfaces represent the event horizons of black holes—and to Cartan’s geometric approach to differential equations—where such surfaces are directly related to the existence and determination of solutions of differential equations in general.

Children in the 1960s amused themselves with Etch A Sketch, a toy that comprised a small grey screen and two knobs that could steer a black dot and trace out a curve whose contortions were limited only by one’s imagination. The dot could be moved vertically (y-direction), and horizontally (x-direction), producing a trail which, to a mathematician, represents the graph of a function in the form ‘y = something, and x = something else.’

In our search to find solutions to our main equation, we were open to the idea that the functions representing such solutions might appear in a variety of forms, including the form that is referred to above. Considerable simplification was achieved by our requiring spacetime to be of dimension 2+1, i.e., two dimensions of space and one of time. We also made the unorthodox assumption that some of our major dependent ‘variables’ did not vary at all but were constant, or even zero. At that point, we began our search.

We found the first nontrivial solutions of Élie Cartan’s equation—an equation that had remained unsolved for eighty years. These solutions, which are automatically also solutions for the null-surface formulation, are published in the journal General Relativity and Gravitation. (See the publications listed below).

The second solution (2019) can be given in the manner ‘y = something, and x = something else’ that is described above. It uses the familiar log function and a parameter t, which can be interpreted as the time that passes when using some cosmic Etch A Sketch device to draw a trajectory across a spacetime of 2+1 dimensions. The solution is written:

This solution is interesting because of its simplicity and because the curvature (usually denoted by R) of spacetime varies from point to point and depends in a simple way on t:

This expression involves division by t. When t is zero, the curvature R will become infinite and produce a singularity in spacetime—as would occur at the centre of a black hole or the instant of the ‘Big Bang,’ when the universe began. 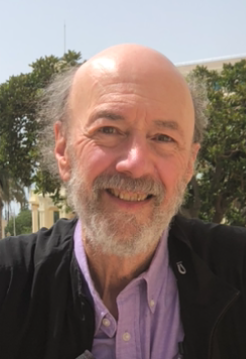 Jeff Williams (Ph.D.) is a Professor in the Department of Mathematics & Computer Science at Brandon University. For some years, his research has focused on gravity and the topological structure of spacetime. He is currently working on the null-surface formulation of general relativity.