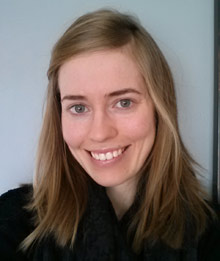 I graduated from Elton Collegiate in 2009 and started at Brandon University that fall. I’m currently in my fifth year of an honours degree with a major in Anthropology and minor in Gender and Women’s Studies. I also have an additional focus in Native Studies. I’m currently finishing my Anthropology thesis, which includes original research on local/organic farming and farmers’ markets in the Brandon area.

I have received a number of scholarships and awards from BU. I have also volunteered with a number of organizations since beginning my studies, including extensive work with the Marquis Project and the Art Gallery of Southwestern Manitoba. I currently serve as the Chair of the Women’s Collective on campus. Other volunteer experiences have included work as an Archaeological Crew Member at the Camp Hughes dig this past summer and involvement with the Brandon Fruit Share.

I was born in Toronto and lived there until I was eight. My father is from the Russell area, so I suppose that’s why we moved to Manitoba. My mother is German and moved here in her early twenties. I have a strong connection with my German family and spent a lot of time there as a child. My grandmother is an incredible woman and she has deeply influenced me.

I was heavily involved in sports growing up, but was always most interested in reading. My parents grounded me from reading on more than one occasion because I would read for hours every day. I also enjoy writing, music, cooking, baking, pottery, beading, and making things in general. I struggled with clinical depression throughout high school and my first couple years of university and overcoming it has been difficult but amazing.

When I was ten, I read a book that had an anthropologist as the protagonist. I’d never heard of anthropology before but it sounded unbelievable; it allows for the study of virtually anything that involves people. I started university with a major in Anthropology and minor in History, but switched to Gender Studies when a professor told me that female anthropologists tend to get better information from female participants. It’s sort of a strange connection to make, but Gender Studies changed the way I think and I’m so glad to have chosen it.

I took an introductory Native Studies course a couple years ago because I felt like I didn’t know anything about the original people of this land and quickly fell in love with it. I grew up in the GTA where there weren’t reserves and we just assumed that Aboriginal people were Indian or Middle Eastern, because my mom, as a German person, had no idea. I don’t think anyone should live in Canada without listening to what Aboriginal people are saying.

I don’t know; this is a difficult question to answer. I suppose it’s to listen and look in order to learn. It’s important to try new things and to be open to the experiences of others.

I’m passionate about Anthropology and it’s what I want to do, so graduate school is next. I’ll be starting a Masters in Anthropology in the fall and I’m planning on doing research in community and urban gardening. My goal is to be a part of improving food systems, especially in cities where people rely so heavily on imports. I’m not quite sure where I’ll be going to school for a Masters; Saskatchewan, Dalhousie, and Groningen are all possibilities right now. An interest in how people live in other areas will result in a lot of travelling.

Alexandra is an exceptional, tireless and passionate student in her final year in Anthropology. Her undergraduate honours thesis project is an examination of various issues and perceptions about local and organic food and its production. Her research subjects were the owners of a local, small-scale vegetable and berry farm operation that distributes produce through a farmers’ market and a community sponsored agriculture program and their customers. She conducted her ethnographic fieldwork for the project last summer and fall and is now writing up her thesis. She is planning to begin a Master of Arts in the fall of 2014.