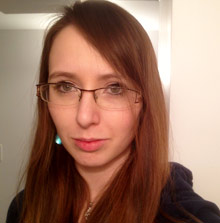 I graduated from Esterhazy High School in 2011. I am currently in my third year here at Brandon University pursuing a Bachelor of Science with double majors of philosophy and computer science and a minor in math.

This year I also was able to participate in the ACM programming contest. This was the first year BU sent a team to the competition. For the competition we had to work on challenging problems and apply what we have been learning within a time constraint while sharing one computer. It was certainly a unique experience for me and something I would definitely do again.

I am originally from outside of Esterhazy, Saskatchewan. I grew up on a farm and had horses which allowed me to be involved in many activities I otherwise wouldn’t have such as 4-H and the Twin Valley Riding Club. I also was very busy with skating, as a competitor and as a program assistant with the CanSkate program. In high school I was certain I would eventually go to university with the only questions being where and for what. Having family in Brandon eventually brought me here for university where I have been able to pursue two of my major interests concurrently, both of which will allow me to do either of the possibilities I’m considering for once I finish my undergraduate degree.

For computer science I initially became interested because of my high school computer science course. We were required to take one of two different types of computer courses and the one didn’t sound remotely interesting so I took the programming one. The grade 12 course at my high school was taught in Java and at the end of it I was interested in learning more about programming. When I got to BU I wasn’t sure what to actually study as my original plan was to go to law school but I was undecided on what to do for an undergrad degree. I ended up going with computer science and have found it becoming more and more interesting as I continue with it. Math is so intertwined with computer science that studying math became almost inevitable.

Philosophy was something I became interested in after first year her at BU. I decided to pursue it for a few reasons. Most people initially think of computer science and philosophy not really matching up but I have found them to complement each other quite well. I took two philosophy courses first year as part of the liberal arts requirements. After these caused me to consider philosophy I then decided it would be a good choice and one that allowed me to work on my writing while learning of different ideas about many different subject areas. The analytic side of philosophy has definitely caught my interest the most because of its close connection to math. I have found that learning some of the history of math from this different angle has also helped me better understand what I learn in math and computer science and how they became the subjects they are now.

My philosophy in life includes these two things. If you can help someone then you should and if you are going to something you might as well do it right. This is because I believe that if there is something you want to do you need to be willing to work as hard as you can until you succeed even if it is difficult because in the end it will be worth it. I also believe that everyone needs help at some time and if you are able to help them there really is no reason you shouldn’t. Growing up I was involved in a lot of different organizations. The people in these groups, including my parents, would put in countless hours of hard work just to help out whenever it was needed. This to me was simple, helping someone else can make a huge difference for them and if it takes a little of your time to make that difference then you should do what you can when you can.

In the future I think I would ideally combine my interests in computer science with my original plan of law. As of yet I am undecided but after I complete my degree here at Brandon University I will most likely go to law school, pursue computer science further, or some combination of the two.

Bailey Kacsmar is a senior student in the mathematics and computer science department. Bailey was a member of a 3-student team that represented BU this academic year at the ACM International Collegiate Programming Contest. This was the first year that BU participated in this high-profile computer programming competition, and our student-team performed very well. Out of 13 student teams from Manitoba (a total of 39 students), BU’s team was the only one that included a female student. In other words, Manitoba was represented this year by 38 male students and Bailey.