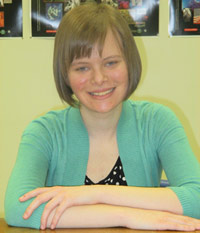 I attended Elmwood High School in Winnipeg, graduating in 2010. Currently, I am in year four of my five-year concurrent Bachelor’s of Music and Bachelor’s of Education program with Drama as my second teachable.

I have participated in the Winnipeg School Division Honour Band and auditioned into the Manitoba Provincial Senior Honour Band in my grade twelve year. I have also been involved in many exciting youth theatre workshops at the Manitoba Theatre Centre and the Prairie Theatre Exchange, as well as volunteer work for the Winnipeg Fringe Festival. I have received a number of BU scholarships and awards, as well as awards in the Brandon and Provincial Arts Festivals. I will be participating in the National Youth Band of Canada this May. But I am extremely proud to have made many talented friends and colleagues at the School of Music here!

I was born and raised as an only child in Winnipeg, Manitoba and spent 18 years of my life there before moving to Brandon to start my university education. There was a bit of bullying that I dealt with in my later years of elementary and going into high school and a lot of friendship problems as well. I am a huge fan of comedy, whether it is in movies, television shows or in stand up form. I’m also terrible for quoting movies and show that I’ve seen one too many times.

In terms of musical preferences, I have grown up with my parents’ various kinds of rock music, and developed my own love for classical through my musical studies. I’m starting to become a bit more open to other kinds of music as well, such as different kinds of ethnic folksongs and some pop music. However, I can’t seem to get my head around rap and country for some reason. Despite being in the field of music, I still get nervous, both in performance and social situations.

My second love is theatre; it was another career path I had considered. I am a huge lover of animals, and my biggest weakness is for cats, having two back in Winnipeg.  I also don t mind trying different kinds of food. I used to be a picky eater as a kid, but now I’m starting to be a little adventurous towards trying new things.

Music was always a part of my life in some shape or form. My parents sang to me as a kid, and let me play a collection of tape cassettes of children’s songs over and over as a kid. I sang in the elementary school choir, then picked up clarinet later on. My band director Andrew Wahl had offered me the chance to play with the older kids in Community Youth Band, and making music with them was exhilarating! After a performance at the Festival with them, I was sold. I wanted to attend university to study music. My teacher was luckily very supportive of this and I have him to thank for many private lessons and pointing me to Brandon University, and the idea of becoming a music teacher. After attending my first open house, I fell in love with the school and after some persuasion of my parents, I was able to apply and audition and I don’t regret it one bit!

I believe everyone was made to do something awesome or has a place where they belong. It’s up to them to be willing to explore what that awesome thing and that place are. However, they need to make sure they have that love for it and remember why they’re doing it in the first place. One thing I try to do is accept people despite the mistakes that they have made. It is good to be a supportive friend, but you cannot tell a person how to live their life. Everyone’s journey is different.

Right now, I certainly see myself finishing my degree within the next year or so. There are a lot of things I feel as though I still need to learn and want to explore and I have contemplated a Master’s Degree. I’ve thought about a multitude of things from travelling somewhere exotic to starting an extremely accessible community theatre program in the Winnipeg community where I grew up. I’ve also considered world domination. Using Jell-o. But one thing I am certain of is that Music and the arts are definitely something that should be there. It’s the one thing I can’t see myself without.

Amanda is one of the most hard-working students I have known. Typically, the music education students are very busy with the heavy workload in their program and do not have time for many of the performance/competition related activities. Amanda has worked to achieve a high level of performance. I often see her at school late in the evening and early in the morning and she is practicing or studying. She sets very high standards for herself and works to achieve them. Last year Amanda won her class in the Brandon Arts Festival and was invited to compete at the Provincial Music Competition (Associated Manitoba Arts Festivals). She won Second Prize for her performance. She also competed in the BU Concerto Competition (against graduate students and performance majors) and received an honourable mention for her performance and I received a note from the judges letting me know how impressed they were with her performance and level of musicianship. Amanda auditioned for and won a spot in the National Youth Band of Canada (musicians/students from all over Canada compete for this). Amanda is also a leader among her peers—she helps and encourages the younger students and is a positive influence in the school.