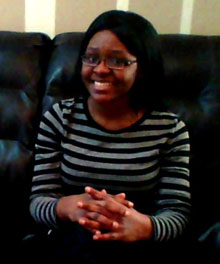 I am currently taking a four year Honours degree in Arts with a major in Economics, at Brandon University.  In 2012  I graduated with a three-year Bachelor of Economics, with a speciality in Engineering Economics  from the University of Yaoundé II, Cameroon.  I earned my high school diploma in 2008 from Biyem-Assi High School.

I am proud to have been among the best students of my university who have received the premium granted by the Head of State of my country, Cameroon, during three years in University of Yaounde II.

I was born in March 1991 in Yaounde (the capital of Cameroon).  I grew up there and at age 17, I graduated from high school.  I went to university in another town, Soa, where I ended with a three-year Bachelor’s degree in economics. Then I came to Canada, first to Calgary, where I studied English for four months.  Finally I arrived here in Brandon on December 2012 to complete my degree in Economics.

My motivation to study economics was to first understand how the market, banks, and government work.  Also I wanted to understand why unemployment in my country and other countries is so high.  And finally I wanted to do an international study – Economics is one such area.

I think our future depends on our belief, that is to say, on our faith. There is a proverb that says whoever wants to travel far, must spare his horse.   However, I believe that man proposes but god offers.

I see myself in the future either in Canada or in the United States or in Cameroon.

Anne Lucie is an excellent and an A student in our department. She is in her fourth year and plans to go to a graduate school.  She comes from Cameroon, and is fluent in three languages: French, English and German.  It is rare that we have outstanding female students in economics.