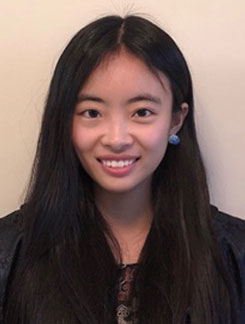 In 2015, I graduated from Beijing No.50 High School in Mainland China. A month before my 18th birthday, I made the life-changing move to pursue a bachelor degree in North America. It took me a year to improve my English from almost zero to university-entry level. Fortunately, in 2016 fall, I was successfully enrolled at Brandon University. Now, I’m in my final year of completing my 4-Year Honours Bachelor of Arts Degree, with a major in political science and a minor in economics.

The journey of being an international student and a young female adult in a foreign country by myself is challenging, but I am grateful for the awards and scholarships I received, which were not only the recognition of my accomplishment by my professors and peers, but they are the warmest encouragement to my endeavour.

I was placed on the Dean’s Honour List every year and inducted into the President’s Honour Society since my sophomore year. I am proud to be a recipient of thirteen BU scholarships, including three Brandon University International Undergraduate Student Scholarships and two President’s Leadership Scholarships.

During my past four-and-half-years of residency in Brandon, I have volunteered and worked to serve the student body, especially visa students, refugee students, immigrants, and students with mental health struggles. I was on the executives or an active member of multiple organizations and institutions, including the International Students’ Collective, University Senator Board, World University Service of Canada, Westman Immigrant Services, Brandon University Enactus Organization, Political Science Society, Student Leader Program, Peer Wellness Educator Program, and the Brandon University Students’ Union.

Being born and raised in the mega capital of China, I was constantly influenced by the dense population (about 22 million), the rapid urban pace, and intense pressure from peer competition. Instead of playing trick or treat on Halloween or building sandcastles on a family vacation, my childhood and teenage-hood were filled with endless assignments and lectures. In high school, my classmates and I would attend classes from 6 am to 6 pm. Our lunch break, supper break, and the whole evening were occupied with homework and mock exams. However, I managed to train the athletic and artistic sides of me by spending seven years in Beijing Amateur Youth-Athlete Swimming School (major in butterfly stroke) and five years in playing piano (Chinese Grade Examination of Musical Level 5).

I selected political science, the scariest major for an international student who does not speak English as a mother tongue. Initially, I just wanted to challenge the severe stereotypes back home: women cannot thrive or even survive in “serious” professions, such as politics, business, and law. Now that I am a senior student in my department, I am continually acquiring and improving my skills in critical thinking, logical reasoning, reading comprehension, public speaking, and argument structuring, which are all essential for my dream career in corporate law

This paragraph of quotes has inspired me throughout my darkest times, and I would like to share it with all the ambitious and determined women out there who are ready to make history.

To be a successful corporate lawyer in North America is my dream since my childhood, and I have worked toward this goal ever since I started my academic and professional pursuits in Canada. After I graduate from Brandon University and meet the criteria of a law school applicant, an acceptance letter from the University of Toronto Faculty of Law, Osgoode Hall Law School, or Queen’s University Faculty of Law will be a dream come true.

April is in her final year of her Bachelor of Arts (Honours) degree, majoring in Political Science and minoring in Economics.

April is an outstanding young woman, and one of the hardest-working students I have ever met. Although April came to BU as an international student from China with only a limited knowledge of academic English, she has excelled in every single one of her classes since then. Not only is April a gifted scholar, she is committed to serving others both on campus and in the larger community. Along with her current role as Vice President External of BUSU, April is an active member of the International Students Collective, Enactus and the BU Politics Club. In addition, she works as a translator at Westman Immigrant Services and assists new families’ transition to life in Canada.

April is a joy to have in the classroom. Not only can her instructors depend on her to come to class prepared and ready to engage in discussion, her enthusiasm and upbeat attitude has a positive effect on everyone around her. April has emerged as not only one of our top students, but a mentor and leader to her peers.

April’s dream upon graduation from BU is to attend law school in Canada. I have no doubt that with her drive, determination, and scholastic ability she will achieve whatever goals she sets for herself.

Second Nominator:  April is exceptional in both her academic and extra-curricular pursuits.

I have known April since 2017 through her positions on various student groups including the Brandon University Students’ Union.  April has served on the executive of WUSC, Enactus, and was the President of the International Students Collective (ISC) of Brandon University.  Her accomplishments in these roles have been outstanding and include increasing the size of the ISC from 20 students to 150 students, participating in the 2018 Enactus Canada Regional and National Competitions, Enactus World Cup and the National Leadership Summit, and advocating for international student rights.  April served for two years as the International Student Senator representing students’ concerns to the Brandon University International Activities committee of Senate.

April is currently the Vice-President External for the Brandon University Students’ Union.  This role primarily serves as the liaison between BUSU and all BUSU recognized student groups, external stakeholders and the University administration.  April has played a fundamental role in assisting the University with the transition to mandatory health care coverage for all international students.

In addition to these extra curricular endeavours, April is an outstanding student.  She is currently taking six courses in order to graduate this spring with the hopes of attending law school.