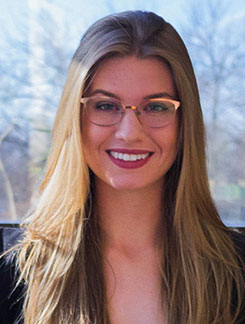 I have received a high school diploma from Hamiota Collegiate Institute and I will be graduating from Brandon University in May of 2020 with a Bachelor of Music, Voice Performance.

I was the recipient of the Brandon Sun Rose Bowl for Voice Performance at the 2020 Brandon Festival of the Arts. I was also inducted into the President’s Honour Society at Brandon University in 2019, and in 2018 I won the concerto competition through the School of Music and was able to perform with the Brandon University Orchestra.

“Originally from Hamiota, Manitoba, Jaimie Rose is a strong minded and passionate individual. Her heart is set on becoming a professional musician with a focus on contemporary art music. She also has a love for musical theatre, hiking and fashion.”

I’ve always had a passion for singing, but I began taking voice lessons when I was six years old. I originally wanted to be a high school music teacher, but once I got to university I began to appreciate performing a lot more. Through many ups and downs, I discovered my true passion was new music when I premiered Luis Ramirez’s piece, The Internet, in 2017. The process of bringing a new piece to life was fascinating to me, and now I never want to stop doing it.

Never let someone else’s happiness come before your own.

After obtaining a master’s degree and performing for a couple of years, I would love to settle down and run a new music festival or ensemble to educate students and the public on the fantastic world of new music.

Jaimie Rose is a fourth-year vocal performance major in the School of Music.  Jaimie is a voracious, highly disciplined student with a truly kind heart — a fierce competitor who is the first to cheer for her fellow singers — what a wonderful duality for one who wishes to make her way as a performer!  Jaimie has been a top student in the School of Music, receiving consistent honours both academically and in performance, including being chosen the winner of the 2019 Concerto Competition.  She has also maintained a busy schedule outside of the school, winning a Manitoba Provincial Gold Medal through the Royal Conservatory of Music, receiving top prizes in both our Local and Provincial Music Festivals, as well as being invited to participate in the prestigious Summer Voice Program at DePaul University in Chicago.  Her openness and enthusiasm for exploring ideas both concrete and illusive — in language, idea, gesture, emotion — have made her an absolute joy to work with as a voice student. I look forward to seeing what the future holds for Jaimie!