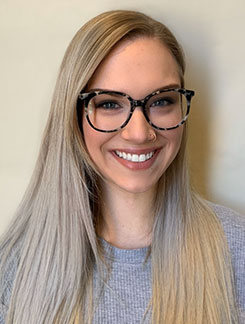 I graduated from Dauphin Regional Comprehensive Secondary School in 2015 and am now in my final year of my 4-Year Honours Bachelor of Science. I am majoring in chemistry and minoring in mathematics.

I have been placed on the Dean’s Honour List for all 4 years of my degree and inducted into the President’s Honour List for the past 3 years. I have received many scholarships and bursaries from Brandon University that I appreciate enormously. These scholarships and bursaries have given me financial stability, which has allowed me to focus on academia.

I have also received an NSERC-USRA at the University of Saskatchewan in 2018 and had the privilege of being involved in research at a different school!

I have been actively involved in the Brandon University Chemistry Club since 2015 to present, and in 2018, I was co-president!

I knew I wanted to pursue a career in healthcare because I had role models in my life who had careers in the medical field.  My mom is a dental assistant and my stepdad is an internal medicine doctor. I knew I wanted a job that would allow me to have an impact on the community and help others in need. I decided to get my Bachelor of Science with the hopes of getting into dentistry and ultimately becoming a Doctor of Dental Medicine (DMD).

While in my first year, I did not know what science I wanted to major in and picked chemistry in the hopes of finding a passion for it later on in my degree. By my second year, I knew it was the right decision when I found an interest in organic chemistry!

Tell me about yourself

I was born in Winnipeg and have lived most of my life in Dauphin, Manitoba. Throughout my life, I have been involved in multiple extracurricular activities along with working part-time since the age of 13. Extracurricular activities in which I have been most involved in include learning to play the guitar, learning to horseback ride, and Ukrainian dancing. Most of the jobs I have worked while not at school include waitressing and bartending!

My philosophy in life is “knowledge is power”. Throughout my life, I have had an immense desire to learn, and my time at Brandon University has only increased that desire. I think that in being a woman, it is especially important to pursue an education, and I am beyond grateful that I have had the opportunity to do so!

In the future, I see myself continuing my education through a graduate program, whether it be Doctor of Dental Medicine or a master’s degree.

I would like to nominate Taylor Kostyshyn for the International Women’s Day celebration. Taylor has been an amazing student within our program at Brandon University (4-year Chemistry – Honours). She has received numerous awards within our Department and been an active member of our student Chemistry club. In addition, she has embarked on some challenging research projects both at Brandon University and at the University of Saskatchewan. Taylor was awarded an NSERC-USRA grant that allowed her to work a joint research project and BU and the U of Saskatchewan. Taylor’s Topics and Honours projects have been the development of a novel sulfonylation reagent that will hopefully one-day bare her name. Taylor often has friends (some who have graduated) visit her in the lab to see how she is doing and what experiment she is up to next. It has been a great pleasure to see her grow, learn, and mature as both a student and researcher during time at Brandon University. Taylor has much to contribute to the world and society will be certainly be blessed by her contributions.