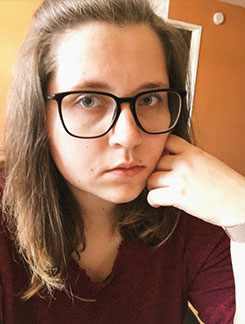 I am in the third year in Computer Science.

I am 21 years old, from Ukraine, moved to Canada three-and-a-half years ago.

I took the first-year Computer Science course and I liked it.

I am planning to go to graduate school and then to earn a PhD in Computer Science.

Sofiya came to Canada with her parents and younger sister from Ukraine at the end of 2016. In January of 2017 Sofiya started her studies at Brandon University, and she is currently a 3rd year student in the Department of Computer Science. Her first semester was difficult because of the change of language, and the cultural adjustment of moving to Manitoba from a big European city. Sofiya has overcome the challenges she faced and thrived at Brandon University.

She has worked as a research assistant in the Department of Physics for over a year. She joined a fairly big group in the middle of an ongoing project, but she has already made a significant contribution. The work involves solving a set of integro-differential equations, which are physically relevant to describe the behaviour of strongly interacting systems. These systems have been studied experimentally for decades, and are currently the focus of several big groups working at the Centre for Nuclear Research (CERN) in Switzerland. Sofiya has figured out a method to include some corrections to the standard equations that have never before been considered. The results of her work could have a significant impact on the theoretical status of strongly coupled field theories.

Sofiya is a creative and meticulous programmer with a bright future in computer science. She’s interested in encryption technology and data science, and intends to go to graduate school in Canada.