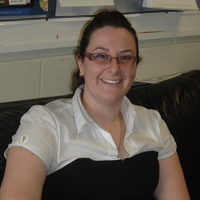 From 2007 to the present, I have been enrolled in the Bachelor of Science (Honours) in Applied Disaster and Emergency Studies, with a Minor in History from Brandon University.

From 2001 to 2007, I completed a Bachelor of Science in Physical Geography focusing in Atmospheric and Hydrological Science from University of Manitoba.

In 2001 I graduated with a Gold Diploma from Virden Collegiate Institute.

Growing up in the western Manitoban town of Virden, I lived an active live through sport, Girl Guides of Canada and other community involvement. In 1998, my parents divorced, and I started living in Alberta during the summer and winter breaks. This move was an excellent opportunity. It allowed me to broaden my horizons, learn new life lessons and truly become a western women.

Upon graduating from Virden Colligate Institute, with a Gold Diploma, I enrolled in the University of Manitoba, with the intentions of becoming a dental hygienist. Upon the completion of my first year, I decided that the field of geology and geography is where I would excel, especially with the specialization in Atmospheric and Hydrological Sciences. This was a true honor graduating with this degree because I was apart of the first graduating class, as well as the first women to graduate within this focus.

In 2007, I enrolled in the Applied Disaster and Emergency Studies program. This program has combined my love of the weather and natural hazards into a potential career. While attending Brandon University, I have not let my student activist ways disappear. Since 2008, I have been a sitting member on Brandon University Students’ Union as a number of different student representatives. I have also been an active member of the Brandon University Women’s Collective, and have been striving to bring awareness to the campus and the community with regards to Women’s issues and sexual health. Some of my fondest accomplishments, with the Collective, are organizing the 20
th
Anniversary Vigil for the Ecole Polytechnique Massacre, and Take Back the Night 2009. This ability to raise awareness, with regards to violence against women, makes me feel incredibly humble, and realize that one voice can make a difference.

In 2001, I became a leader with the Girl Guides of Canada and have continued until this day. Being a Leader is something that is extremely important to me, in part because it gives me the ability to help young girls reach their potential and realize that they can do anything.

A life long love of storms led me to my first degree in Atmospheric Science. Upon graduation, I discovered the unique program of Applied Disaster and Emergency Studies, offered only at Brandon University. This opened up the ability to turn my love of the weather and other disasters, into a practical application.

Live your dreams, and keep pushing yourself to reach them.

My ultimate goal is to become an academic, researching and instructing future Disaster and Physical Geography students. But for now, I am thinking of working with Tourism Companies to develop tourist emergency preparedness plans, to increase the safety of those vacationing.

“Linda is a stalwart, eager, hard working and committed member of the BUSU Women’s Collective. She has doggedly persevered in organizing several successful events. She is the unsung hero. And, she does really interesting volunteer work with the Girl Guides of Canada.”