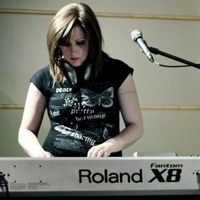 Prairie born pianist and vocalist Miranda Young originates from Regina, Saskatchewan. Her keen interest in music began at the age of 5 followed by several years of classical study through the Royal Conservatory of Music. During this time Miranda became heavily influenced by Top 40 and Pop styles and later, several forms of jazz. Influences include Chantal Kreviazuk, Sarah McLachlan, Bruce Hornsby and Diana Krall among others. She also spent much time performing and composing under these influences. In 2003 Miranda recorded ‘Forever One’ in Caronport Saskatchwan, a single which would be re-released on an 8-track demo album recorded by the talented Jared Robinson at Nebulus Entertainment. She was featured on local Nebulus artist compliations “A Nebulus Christmas” (2006) and “This Christmas” (2007). Shortly after, Miranda started playing keyboards/back-up vocals with Sask-based country artist Erin Fleury and the ‘Erin Fleury Band’ until January of this year. As of recent, she has been playing for one of BU’s own, the talented Jessica Moskaluke. Currently, she studies Jazz Piano with multi-faceted performer/composer/educator Michael Cain at Brandon University in Brandon, MB, while keeping busy in several academic ensembles and small groups. Within the last year, Miranda is exploring a new role as Keyboardist/Keytarist/Vocalist in Brandon’s newest party band, Keytar Hero.

My field of study was the obvious choice for me. I felt that I would regret it if I did not learn the skills that it takes to play this complex genre of music we call “Jazz.” Maybe I will go on to play jazz. Maybe I will be a country musician for the rest of my life. No matter where the future takes me, I feel at ease knowing that I went back to the root of music and learned the core skills needed to be a well-rounded musician.

I hope that my future is fruitful and fulfilling. I see myself teaching music, playing and performing, but I also hope to be blessed with the opportunity for marriage and children. A healthy balance of the two would be perfect for me.

“Miranda Young is a third year jazz pianist here at BU. Miranda has made tremendous strides as a musician over the last couple of years. She performs in a variety of ensembles, in and out of school, and has developed into an excellent musician. I can’t think of a more worthy nominee.”