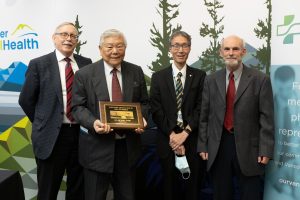 When Dr. Anthony Chow was awarded the Vancouver Coastal Health (VCH) Medical Staff Hall of Honour from the Vancouver General Hospital in October, he was happy to hear Brandon University (BU) acknowledged during the presentation.

It was the opportunity to attend BU, Brandon College at the time, that started his whole career, Chow said. He was a high school student in Hong Kong when BU advertised in the newspaper about a new World University Service scholarship being offered. Chow applied, and after multiple rounds of intense interviews, he was selected.

“For me, it was a golden opportunity,” Chow said. “We were refugees from mainland China and I didn’t have the funds to go to university, so my only hope was to obtain a scholarship … It’s the most important event of my life.”

Chow took an ocean liner across the Pacific and a train across Canada straight into Brandon, he said, where he was met in person by the president of Brandon College at the time, Dr. John Robbins, and professor Norma Walmsley — who spearheaded the scholarship and raised the funds to bring Chow to the College.

“I had no idea where Brandon was, when I learned it was in the prairies I thought it was cowboy country … when I arrived at the station, I had my cowboy hat on and boots,” Chow said with a laugh. “I think Dr. Robbins was amused.”

But it was arriving during Freshie Week that made an impression on Chow, he said.

“I’d never seen such a rowdy bunch,” Chow said, laughing. “They had a mud pit and were throwing freshies in the mud, I managed to avoid that. I hid in the library.”

Chow soon settled right in on campus, he said, and has fond memories of his time as an editor of The Quill, attending football and hockey games and the camaraderie in the residence.

“Brandon was just the perfect place for me. It’s small enough where you get to know everybody and all the professors, it was just a tremendous opportunity,” Chow said.

Chow always wanted to go into medicine, he said. When Chow was in his third year, Dr. Robbins personally drove him to Winnipeg to meet the Dean of Medicine at the University of Manitoba.

“(Dr. Robbins) introduced me and said, ‘you got to take this guy,’” Chow said. “I’m eternally grateful, that could never happen today.”

“It was a great training ground … I stayed on and did some research, I was promoted to a faculty position at UCLA where I stayed for about nine years,” Chow said.

But Chow always felt a calling back to Canada, he said, so when the University of British Columbia (UBC) contacted him about their developing infectious disease and training program, he jumped at the chance.

Chow became Professor and founding Head of the Division of Infectious Diseases at UBC and Vancouver Hospital in 1979. He stepped down in 1994 to direct the highly acclaimed MD/PhD Program at UBC and spearheaded the unique Canadian Institutes of Health Research (CIHR) Strategic Training Program for Translational Research in Infectious Disease (TRID).

“Directing the UBC MD/PhD program has been a most satisfying experience because the program really grew — it’s become a premier program within Canada,” Chow said. “The students just do so well. They’ve done excellent research, with great publications, and really innovative inventions that can be applied to helping patients right away.”

It’s because of his dedication to his discipline he received the VCH Medical Staff Hall of Honour, which recognizes those whose exceptional leadership, clinical and academic service have profoundly benefited the residents of British Columbia.

“I’m sure there’s been very many people who’ve been worthy of this honour … it means a great deal,” Chow said. “I’m very grateful and appreciative.”

Chow said his advice for incoming students, especially international students, would be to look at smaller colleges like Brandon University when starting out.

“I think you get much more out of (a smaller college) than jumping into a huge university right away,” Chow said. “Brandon was just so special.”