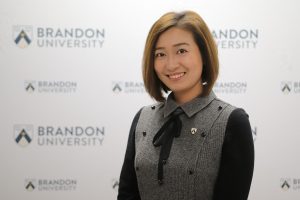 When Iris Wang left her hometown of Luoyang, China to participate in the national cultural exchange ambassador program in Russia, it planted a seed in her heart to explore the world.

Her heart also told her that — upon coming to Brandon to study as an international student — it was the place for her to put down roots.

“I’m lucky because many people showed me their kindness and helped me along the way,” Wang said. “I’m really grateful for that.”

Wang came to Brandon University with the desire to study psychology, she said, inspired to help people after seeing the devastation caused by the Sichuan earthquake in 2008.

“It was a national tragedy, so many lives were taken,” Wang said. “It triggered me to think about how much mental damage this brought upon people and the survivors … I started to have this strong belief of the importance of mental health.”

Wang ended up shifting gears and graduating with a Bachelor of Arts (Honours), majoring in economics and minoring in psychology. She followed up with a Certificate in Business Administration.

“It’s quite an interesting journey, to think back on it,” Wang said with a laugh.

Wang is also the incoming President of the Alumni Association, which she said she’s looking forward to.

“I feel this is a great opportunity. I like to be involved in the community, especially with the Brandon University community because they taught me a lot. I see this as an opportunity to give back,” Wang said.

There were many challenges along the way, Wang said, being an international student and spending so much time away from her family.

“It’s difficult for domestic students, too, to move to another city and be apart from family, but I would say being an international student is even more difficult,” Wang said. “You need to adjust every aspect of your life.”

But the community Wang became a part of really helped her adjust, she said. Wang recalled how meeting her best friend and “Canadian sister” Elizabeth Mandziuk made Brandon feel like home.

“The moment she found out I had never decorated a Christmas tree or had a traditional Christmas meal, she took me home — and I call it home. Her parents became my Canadian parents … when I wasn’t going back to China, their home is a place where I spent a lot of time,” Wang said. “I think this is the reason why I felt so bonded and deeply rooted in Brandon and I proudly call it home.”

Brandon University faculty and staff also played a huge role in Wang’s journey and her development as a person, she said.

“I would definitely say that Brandon University was and still is a catalyst of making and shaping who I am now,” Wang said. “I learned to go into anything with respect, an open mind, no pre-judgements and knowing how to make reasonable decisions in the face of imperfect information. Brandon University taught me all that.”

Wang hopes new students starting their own journey stay true to themselves.

“Don’t ever forget where you came from and why you’re doing what you’re doing right now, and what you want to pursue. Don’t try to become someone else,” Wang said. “There’s a saying in Chinese, which if I translate it into English says, ‘be a true person before everything you do, high morals direct to great achievement.’”