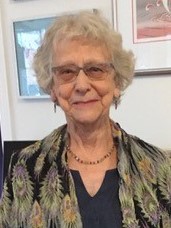 Although she graduated from Brandon College — now Brandon University — almost 70 years ago, Joan Garnett remembers her time at the college like it was yesterday.

Growing up on a farm near Shellmouth, Manitoba, she learned about Brandon College for the ﬁrst time when recruiters came to her high school in Russell, Manitoba.

“It was a diﬀerent time, that’s for sure,” Joan said. “Doc Hannah and Walter Dinsdale just opened a window. It seemed like the natural next step for me, I don’t know what I would have done if they hadn’t come.”

So, Joan enrolled at Brandon College and studied geology while living in residence. Some of her fondest memories include the Dean of Women, Sarah Persis Darrach, the gatekeeper to the girls’ residence.

Many residents, preoccupied with how Mrs. Darrach aﬀected their lives, were oblivious to the fact she had been a highly-decorated nurse overseas during the First World War. “We were all familiar with the long rose-coloured chenille housecoat she wore at night, especially when she enforced the curfew hour by blinking the outside lights, putting an end to fond farewells as young men returned their ‘dates’ to the residence,” Joan recalled. “Or when she ventured upstairs to make sure we were not having a pajama party — an event which occurred if someone had received a food parcel from home.” Joan also fondly remembers the dances and other social events, spending time with her fellow students and inventing their own good times.

“They were so important, those social events. They put so much work into them and we all went,” Joan said.

The classes at Brandon College were small, and Joan has vivid memories of the professors – each with “their own strengths and peculiarities.”

“With administration, classes, and residences all in one building, we were like a family and learned to innovate, tolerate and adapt – important qualities to apply to the future,” Joan said.

“Being in small classes and socializing together made Brandon College students diﬀerent. We were a very close-knit group, it was something unique and it was a factor in the remarkable achievements of so many of the graduates.”

Joan was nominated to be Lady Stick for her class in 1952.

“There were more qualiﬁed candidates, they just liked me, I guess,” she said with a laugh. “It was a good year, but it was hard to do that and do your studies, too.” After graduating with a Bachelor of Science, Joan followed many classmates to Alberta during the oil boom. She ended up working for Imperial Oil analyzing well samples until she and other women in her department were let go because “men need your jobs”!

Joan stayed in Alberta to work as an X-Ray technician when the president of Brandon College at the time, Dr. J.R.C. Evans, called and asked her to return to Brandon and work for him.

She was honoured he thought of her and accepted the position of secretary to the College President, where she worked for 11 years.

In addition to the daily duties related to the administration of the College, Joan managed the bookstore, opened the ﬁrst Alumni oﬃce, organized the ﬁrst Homecoming, was a shoulder for homesick students to cry on, and thoroughly enjoyed the busy job into which she had been thrust.

From 1995 to 1997, Joan was happy to have the opportunity to once again be in touch with former students as she co-chaired, with Ian Dickson ’58, the Legacy Campaign for the restoration of Clark Hall and the original Brandon College building.

As she approaches her 90th birthday, Joan doesn’t have advice for today’s Brandon University students so much as she has praise and encouragement.

“Times have changed so drastically, I can only admire the courage it takes for them to tackle today’s world, hope they persist in seeking out truth, and thank them for being our hope for the future,” said Joan.