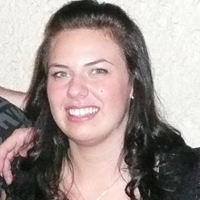 I graduated from McNaughton High School in Moosomin Saskatchewan in 2006.

I am completing my fourth year of study at Brandon University in the concurrent music and education program.

I performed in my first recital at the beginning of February, even though a recital is not required for my degree. It was one of the best things I have ever done and expect to do many more.

In my grade 12 year, I was selected to take part in a program through Exchanges Canada called Forum for Young Canadians. Students who were selected to go were sent to Ottawa to spend a week in Parliament and present on it after arriving home.

I was sent to provincials for piano to perform two pieces, one of which was a piece I wrote.

I went on a missions trip during the summer of 2007. We drove to Mexico and worked with people in Mexico, as well as Los Angeles during the trip.

My dad grew up in the Steinbach area. My mom was born and raised in Bolivia, and came to Canada when she was 17.

I lived in Selkirk, Manitoba during my elementary years, and then my family moved to Moosomin, Saskatchewan in 1998.

I was raised in a Mennonite home.

I have played piano since kindergarten, and I began playing clarinet in grade 5 (and continue to study clarinet at BU).

I enjoy drawing and writing.

I love dogs. I find it difficult to not have one around right now, but I live in an apartment so I can’t give a puppy a proper home at this time.

I love working with people, and I love music. Teaching music seemed to be the right direction.

As humans, it is not our responsibility to place judgement; rather, we need to present what we believe to be true, at whatever costs this may bring. At the same time that we talk about what we believe to be true, we also need to set an example by living in those same ways. When we encounter people who disagree with us, we should not treat them as if they are any less valuable or unworthy. When someone has done wrong and he/she asks for forgiveness, forgive. By trying to live in these ways, everything else I do in life is given meaning and purpose.

I cannot predict where I will end up. I am not sure where in the world I will be living; I will go wherever I am sent. I do have a pretty good idea that my future will involve playing and teaching music in some way, and getting a puppy in the near future.

There is also a marathon in Antarctica, but that is more of a thought that occasionally crosses my mind than an idea. It is very expensive to fly to Antarctica.

“I would like to nominate Alysha Klippenstein, an outstanding music education major in fourth year at Brandon University.In addition to being an outstanding academic student, Alysha is an strong clarinetist, studying with Catherine Wood -she just performed an outstanding recital that included a hymn, classical Brahms sonata, a jazz combo, and a bluegrass group – and studies jazz piano with Michael Cain.This summer she is traveling to Boston on her own dime to volunteer and work with inner city youth, in the area of music education.Two summers ago, she went on a mission trip to Mexico to build a school, etc. etc. etc!”