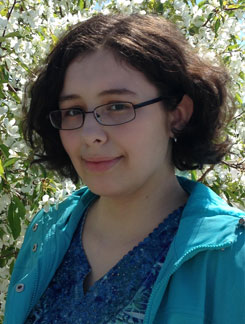 I graduated from R.D. Parker Collegiate in 2013. I am currently in my third year of a four-year Gender & Women’s Studies major, with a minor in English.

I am very proud of my academic accomplishments. I’ve consistently received Honours with Distinction and have been the recipient of multiple scholarships as well as an invitation to join the Golden Key International Honour Society back in my first year. Also, I’m not sure if many would consider this an “accomplishment”, but I am now a senior student assistant at the John E. Robbins Library. It makes me incredibly happy to be able to work there as I’ve always adored libraries and enjoy being able to contribute to the university in such a way.

I grew up in Thompson, Manitoba with my mother, older brother, and our cats. I enjoy reading, writing, and music. I’ve loved books ever since I was a child, with the public library being one of my favourite places in the world; as a result, I’ve wanted to study and become a published author for a very long time, which then became one of my primary motivations for attending university.

My original intention was to study English and Creative Writing. However, I took Introduction to Women’s Studies in my first year as an elective and found it absolutely fascinating. Prior to taking that class, I had not realized that Women’s Studies was even an option – it was something I was completely unfamiliar with. Yet I’ve always been passionate about social justice, and upon being introduced to Women’s Studies, I decided to switch majors so that I could learn more.

This might sound superstitious, but I’ve always believed that everything balances out in the end. For example, I believe that when you suffer, life is helping you get your share of hardships out of the way early so that there’s lots of room for joy later on. Similarly, I believe that what you get out of life is exactly what you put in, because again, the universe instinctively seeks balance and will always return what you put out. Thus, I try to be as kind and helpful towards others as I can be.

Despite having switched my majors, I am still very interested in books and writing. My hope is that my future career somehow involves both; for example, I would love to study feminism in the media, or to possibly write LGBT genre fiction that isn’t just a string of coming-out stories. Other than that, my dreams for the future aren’t particularly exciting. As long as I have my family and somewhere quiet I can work, I think I will be satisfied.

Shaylyn has a brilliant, curious, and sensitive mind that inspires and encourages those around her. Her contributions in class are insightful, wise, and novel.