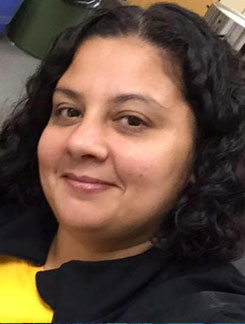 I graduated from River East Collegiate in Winnipeg in 2003. I attended the University of Winnipeg for one year between 2004 and 2005. I attended Brandon University from 2005-2009 and returned in 2013 to finish my degree. I will graduate this year with a 4-year honours degree in Sociology and minor in Native Studies.

I am proud of my role as Indigenous peoples’ director because it has provided me with the opportunity to be a support and advocate for Indigenous students on campus. Being an Indigenous student comes with its own set of unique challenges and having firsthand experience with some of those struggles I have been able to provide encouragement and support to fellow students.

Working as a research assistant for Dr. Yvonne Boyer for the past two years has been one of my greatest accomplishments. Since working as research assistant I have co-authored with Dr. Boyer a chapter titled “Treaty Right to Health in Manitoba Canada” which will be published in a peer-reviewed book in 2016. I have also presented at two conferences and participated in groundbreaking research on the Indigenous’ right to health.

Some of my other accomplishments include completing the student leadership certificate program last year and volunteering as a student leader on campus. I was also selected to be a member on the Community Advisory Council for the Waakbiness-Bryce Institute for Indigenous Health at the Dalla Lana School of Public Health in Toronto, Ontario.

In February 2015, I spearheaded a campus wide food drive and collected over 500 pounds of food and supplies, which was sent to Naujaat, Nunavut to be distributed through their food bank. It was an exhilarating experience knowing I had been able to help some people in need.

My proudest achievement thus far has been my ability to effectively manage school, work, and extra-curricular activities while being a single mother to my daughter.

I am proud Metis woman born and raised in Winnipeg’s inner city. I had a great childhood; however, I didn’t always have the most stable home growing up. I moved several times and attended 12 different schools before graduating from high school in 2003. While attending university the path to getting my degree has had many bumps along the road. However, after the birth of my daughter Kiera in 2012 I knew it was the right thing to go back to school and finish my degree. Since returning to school I have found a new appreciation for education and learning and I am proud to say I will be the first person in my immediate family to graduate with a post-secondary degree.

I became interested in sociology after taking a few criminal justice related courses within the sociology department. The study of crime, deviance and criminal justice are important and relevant topics within society today. I like to focus on how I can incorporate what I learn in sociology to issues affecting Indigenous people especially disadvantaged youth.

My philosophy in life is that when mistakes happen in life the best thing you can do is learn from them and move on. Every person’s path in life is different and it’s important to focus on improving yourself and staying positive.

Over the next three years my goal is to attend law school. After that I see myself being an advocate for disadvantaged Indigenous youth and fighting for Metis rights in Canada.

Sheyenne Spence is a Metis women and a single mother of beautiful Kiera. She is in her final year at BU with a major in Sociology and a minor in Native Studies. She has applied to law school in September 2016. Since May 2014, Sheyenne has been working as a Research Assistant for Dr. Boyer at the Indigenous Health Law Centre. Among many accomplishments, she has worked on many projects dealing with health and the law for Indigenous peoples including co-authoring a chapter in a peer reviewed book, attending a national conference and connecting with the larger national Metis legal community in Ottawa, been appointed to a national community council as a representative on the Waakebinese Bryce Institute for Indigenous Health at the University of Toronto; helped spear head a food drive for the North and has represented Brandon University in many public events. As an avid volunteer and advocate, Sheyenne has been an outstanding role model for students at Brandon University. She is committed to making positive change in the lives of Indigenous people not only locally, but regionally, nationally and internationally.